SIKKIM: CHAMLING MUST ACCEPT HIS DEFEAT IN POLITICS SAYS GOLAY IN HIS STRONG SPEECH 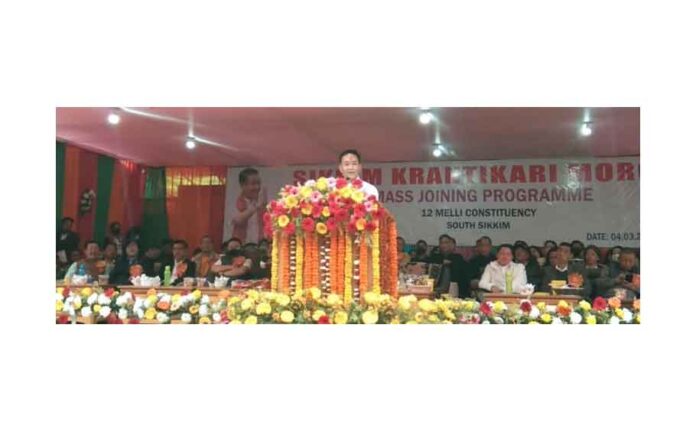 Sikkim: Nearly 1500 persons from Melli and other constituencies joined the ruling SKM today during a mass joining programme of SKM held at Sumbuk under Melli constituency. Maximum of them were from Melli constituency who were welcomed into the party by Chief Minister and SKM president P.S. Golay with khadas and party flags.

In his address, the Chief Minister maintained that SKM believes in inclusive politics to address the vengeful leadership of former politicians which was unjust in every way for the Sikkimese people. I have never spoken ill or bad in my political career, not even during my bad phase in politics, he said.

As the SKM president, Golay welcomed those who joined the SKM at Sumbuk. He urged them to serve the party with a sense of belongingness and to win the hearts of people. SKM is your guardian from now on, he told the newly inducted members.

Golay, in his speech, asked former Chief Minister and SDF president Pawan Chamling to give up leadership and not to mislead the Sikkimese youth. Chamling is a person of undemocratic ideals and a stubborn individual, he said.

On the 30th SDF foundation day, I suggest Chamling to accept that the chair of a Chief Minister belongs to people’s votes and he must accept his defeat in politics, said Golay.

In the concluding part of his address, the Chief Minister made public the financial accounts of the past financial years and declared various new schemes to be implemented in financial year of 2022-23.

He informed about various developmental works sanctioned earlier and assured that the demands of Melli constituency would be fulfilled by the government.

He also announced several developmental works which will be initiated in the constituency including construction works, upgrade of educational institutions, celebration of school centenary, resolving water crisis with improvement in water supply connections, improvement in transportation and tourism sectors, support in maintaining religious spots and completion of remaining tasks.

The Chief Minister mentioned that Sadam-Suntaley ward will be divided into two wards based on public grievances.

Golay added that he aspires to bring balanced development in Sikkim as a whole and not only in few constituencies.

Those who joined the SKM today shared that they were encouraged by the inclusive politics of SKM party and good governance of SKM. Leaders of other political parties who held senior posts like vice presidents and conveners, and panchayats were among those taking SKM membership at Sumbuk.

Minister Sanjit Kharel, in his short address, mentioned that the inclusive politics of SKM is not only encouraging people join the party, but is also reflected in employment opportunities through ‘One Family One Job’ and other developments.