Should marital rape be legal? Does the verdict by Chattisgarh HC give justice? Here’s what we know! 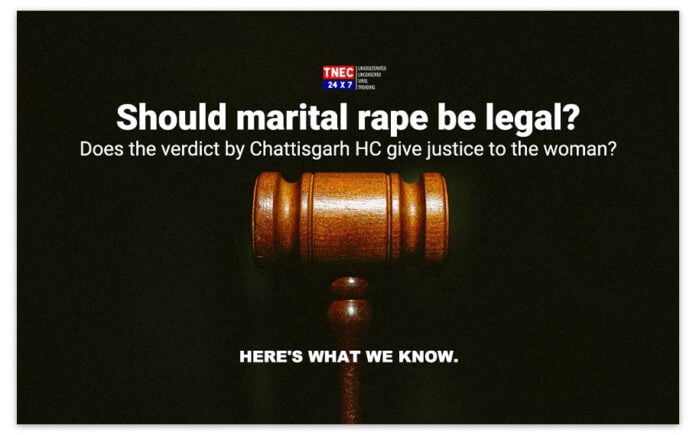 By: Sroweta Kar, The North-Eastern Chronicle

In a country where we worship goddesses, why are women tormented, raped, discriminated against, and everything else we can think of. Marriage plays a very important aspect in Hindu culture and India. Women married off to their husbands in the thought of living a good and happy life but when this becomes a harsh part of life it becomes terrible to live.

Marital rape is something that women ignore or fear to come up with. Marital rape is a legitimate thing if we see Indian law towards rape, Section 375 of the Indian Penal Code defines that “non-consensual sexual intercourse with women.” But as every law has a loophole this has too as it is exempted for husbands who’s wife is 18 years of age.

Now the question is for raping someone does age, relation matter? Or it should be wrong in every manner.

Violating Article 14 of the Indian constitution

According to Article 14 of the Indian Constitution, it states that “the State shall not deny to any person equality before the law or the equal protection of the laws within the territory of India.” But it differs when it comes to Indian criminal law in India, it vividly discriminates against women who have been raped by their husbands.

When IPC was drafted in the 1860s, a married woman was not an independent legal entity rather she was like a pet of their husbands they did not have many rights and were discriminated against in every step. She could not complain against another under her own identity.

Law in India is influenced by British and Victorian norms as a result of British rule. During that time men and women were not equal and women did not have any property rights and were entitled to their husbands.

But when time is changing, some things need to be changed. In the case of marital rape where Article 14 is violated and nobody questions. The main is being equal which is where Indian law is lagging. If the same happens to an unmarried woman, she is protected and as for a married woman it immunized the husband.

On August 23, a verdict was given by Justice NK Chandravanshi regarding a case on marital rape as a revision plea by the husband and his two family members seeking clearing of charges of rape and other offences against him.

The women got married in 2017 to a native of Changorabhata in Raipur. After few days of marriage, she was harassed for dowry and her husband raped her. She filed a complaint at the Bemetara police station of Bemetara district against her husband and two family members.

Regarding the case, HC said, “Counsel for the applicants submits that the complainant and the applicant No. 1 (man) are legally wedded wife and husband, therefore, none of the ingredients to constitute the offense punishable under Sections 376 and 377 of the IPC are spelled out against him, because, in India, marital rape is not recognized and the same is not an offense given Exception II of Section 375 of the IPC.”

Last month, Kerala High Court said that “Treating wife’s body as something owing to husband and committing a sexual act against her will is nothing but marital rape. Right to respect for his or her physical and mental integrity encompasses bodily integrity, and any disrespect or violation of bodily integrity is a violation of individual autonomy.”

Many people shared their views supporting that Indian Law should be changed and it is a high time we recognize it to be a criminal offense.

“Time has come for the Parliament of India to amend Section 375 of the Indian Penal Code to extinguish the legal shield to marital rape. Women who are married cannot be forced against their will to have a sexual relationship by their husbands,” tweeted Congress MP Gaurav Gogoi.

“‘Sexual intercourse by husband not rape, even if by force’: Chhattisgarh HC Neanderthals in India’s judiciary need to wake up. Hope this is appealed in SC asap,” Trinamool Congress MP Mahua Moitra wrote on her social media handle.

The most interesting irony is that Indian Penal law has come from British law and English themselves has criminalized it back in 1991.

Also Read: Shameful! In yet another act woman gets gangraped in Mysuru