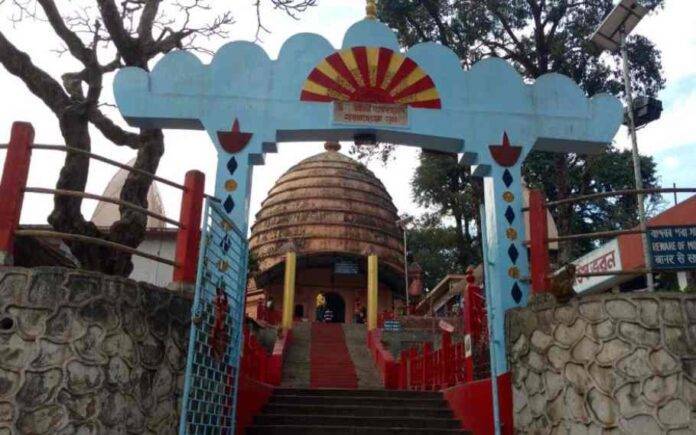 Navagraha Temple of Guwahati, Assam is situated in the south eastern part of Guwahati atop the Chitrasala or Navagraha hill. The temple is also known as the abode of Surya. The temple is dedicated to the nine celestial bodies which is called Navagraha in Hindu mythology.

The temple was built by an Ahom ruler named Rajeswar Singha, the son of Rudra Singha in the late 18th century.In one of the Earthquake occurred in the past the temple suffered destruction as the upper section temple called ‘Sikhara’ got affected but after the natural disaster, it was restored with folded sheets of Iron. A part constructed with bricks called ‘Garbhagriha’ which is the inner quarter of the temple remains in existence as it survived the calamity Earthquake.

During the rule of Rajeswar Singha, a tank was made close by the temple called Silpukhuri Temple. The Navagraha Temple is not just known all over the country for its religious values but known also as a centre of research for both Astronomy as well as for the study of Astrology for the reason of witnessing the 9 celestial bodies.

It is an important religious spot of the Hindus. In Hindu religion the nine planets are considered as gods and are worshipped by people. In the temple there are nine shiva lingams. They represent the nine celestial bodies. These are covered with coloured cloths representing the nine planets. There is a Shiva Lingam at the centre which symbolises the Sun.

The nine planets are Surya (Sun), Chandra (Moon), Mangal (Mars), Budhan (Mercury), Vrihaspati (Jupiter), Sukra (Venus), Sani (Saturn), Rahu (North Lunar Node), and Ketu (South Lunar Node). These Navagrahas are arranged in a circular mode. The temple’s roof is shaped like a dome. It is constructed in the beehive style.

One of the very significant aspects of the temple is that it is the centre of astrological and astronomical research.
The word Graha means “ to attract”. These celestial bodies are believed to affect the physical and mental condition of human beings. The grahas are considered to have both a malevolent as well as benevolent influence on the day-to-day course of one’s life.

The nine planets appear to move in the celestial sphere with reference to the stellar constellations known as Nakshatra (Stars). There are twenty-seven Nakshatras which are repeated in a HIndu Calendar every month. The movements of these bodies with respect to the Nakshatras are said to control a person’s destiny including his thoughts and deeds, status and prosperity. The worship of Navagrahas makes the planets that are in auspicious situations offer increased fruits of benefits for one’s actions while the planets which occupy less desirous situations tend to remove the evil effects of a person’s karma.

The Navagrahas are considered to be intermediaries between the principal deity in the temple, almost always Shiva and the worshipper. They each are in charge of specific areas of concern to the devotee, be it health, wealth,pursuit of knowledge, professional gain or just about anything else. The belief is that worshiping the specific graha for the specific need gets the devotee the boon he craves.