The Farmers Protest: Why it started and its current state? 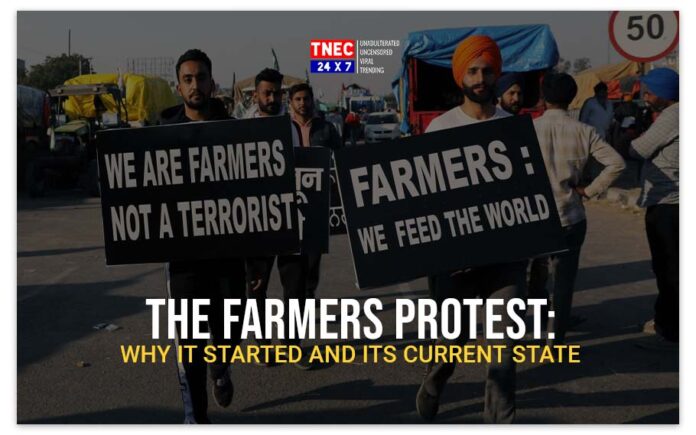 By: Plabita Chakraborty, The North-Eastern Chronicle

Started on 9th August on 2020-2021, is one of the most talked about protest which literally gained a lot of momentum throughout. The farmers protest is a very crucial agitation against three farms acts which were being passed by the Parliament of India in September 2020.

The talk of the town i.e., the farmers want the revocation of the entire farms bill and also they want the legal ensurement of the minimum support price system so that they can get their desired rights and willpower.

The ordinance bills and what is the protest?

The three ordinances that were being passed mostly include- the three agricultural acts: Farmers Produce Trade and Commerce (Promotion and Facilitation) Act 2020, Farmers (empowerment and Protection) agreement of Price assurance and Farm Service Act 2020, Essential Commodities (Amendment) Act 2020 – that were being put forward by the Government of India, jolted the farmers and their rights are not being heard, which is not only bad for the democracy but also reduces the quality of policies and make them harder to implement.

The farmers are protesting as it explains the effect as well as impact the acts will have on the country’s farmers while trying to lead a corporate- led agricultural sector.

It will also change how the agricultural sector has worked since decades. Bharatiya Kisan Union and other farmer’s organization sought permission from the Haryana government for a protest rally.

But it was denied by the BJP-led state government, saying that in the prevailing situation of Covid-19, doing protest will not be the right thing to do. But things worsened, when the farmers didn’t listen and took out protest which had more than 100 farmers participating in it.

Further it also got the name of tractor protest. After a point situation turned violent and at some places, farmers were even lathi charged. There were continuous slogans of ‘Save the farmers, save the mandis’. The farmers also said that they will continue the protest for 6 months to even one year and they don’t have any problem.

Current scenario of the farmers protest

The protest has therefore turned out to be the longest and largest peaceful citizens protest happened anywhere else in the world. It has completed more than hundred days from the time the Samyukt Kisan Morcha has been launched. We all know how much our country needs the farmers, as they are the most essential and greatest treasure of the nation.

The farmer’s community gained large amount of support due to the movement and protest. The impacts the protest had is also immense. There has been boycott of jio services even reliance petrol pumps and malls. Even some toll gates are lying closed without any toll.

Women also joined hands in large numbers and supported the protest. The most important thing to note that is, government is under tremendous pressure from the protest and is also worried about the vote bank.

All in all the farmers protest is altogether has been seeing a great positive change and if this attitude continues, who knows that government might one day be forced to accept the demands of the Samyukt Kisan Morcha.

The farmers protest had created a vast and historic impact in the country which will be the talk of the citizens for a very long period of time. The farmers are our pride and they should definitely get what they need and desire. The increasing suicides of the farmers who are in-debt has also created tension that their livelihood will be at the cost of lost.

Also Read: Farmer’s Suicide: The tragic side of the Agrarian backbone of India