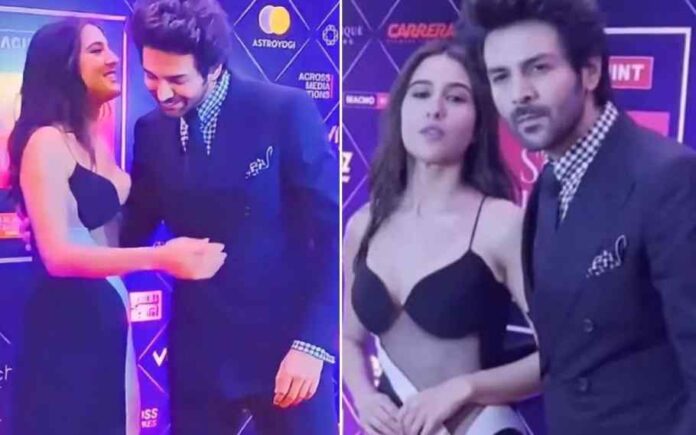 Kartik Aaryan and Sara Ali Khan have amassed their own fan base since their appearance in the 2020 film Love Aaj Kal 2. Despite the fact that the film did not perform well at the box office, the two were rumored to be dating for quite some time before breaking up.

On Thursday, the two met at the Pinkvilla Style Icons event in Mumbai and posed for the paparazzi.

Sara Ali Khan wore a beautiful black gown with a thigh-high slit, while Kartik wore a suit and tie. A video of the two meeting on the red carpet and posing for the photographers together was published on Instagram by a paparazzo account.

The fans of the two were simply happy to see them together. A fan commented, “After so long (crying emojis)..them.” Another reacted with an “Awww”. A fan also wrote, “Long waited for this oh my godddddd my sartik.” Their fans call them Sartik together and shared the hashtag in the comments section.

A fan described their encounter as an “awkward moment.” “Wow, this is awkward,” added another. Sara ‘didn’t feel very comfortable,’ according to many, and merely smiled for photos.

Kartik is currently enjoying the success of his film Bhool Bhulaiyaa 2, which has grossed over $175 million worldwide. Kiara Advani, Tabu, and Rajpal Yadav also star in the film. In Shehzada, he will be featured opposite Kriti Sanon.

Sara Ali Khan was most recently featured in the OTT film Atrangi Re, alongside Dhanush and Akshay Kumar. She’s been collaborating with Vicky Kaushal on Laxman Utekar’s untitled next, and she’s also working on Gaslight.