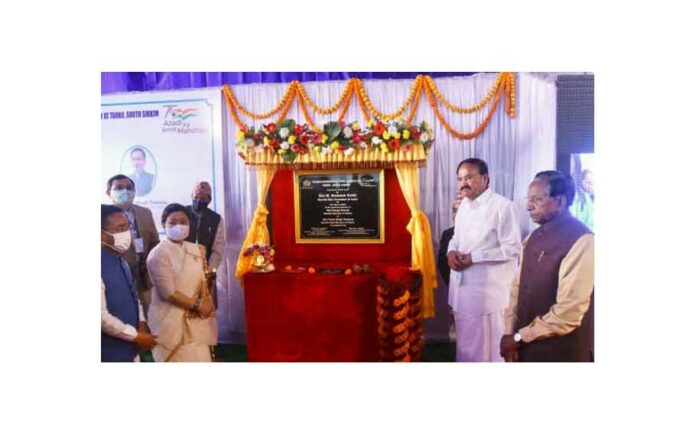 At the outset, additional chief secretary, Education department, G.P. Upadhyaya, in his welcome address, gave a brief introduction about Khangchendzonga State University and made a walk-through presentation.

Apart from the infrastructural plans, he highlighted about the proposed syllabus structure and human resource planning.

He mentioned that the university will be built in an area of 17 acres and will be completed in the stipulated period of two years, with an estimated project cost of Rs. 582 crores.

The presentation on the university was followed by the ceremonial puja, lighting of butter lamp and cracking of coconut by the Vice President.

Thereafter, the Vice President laid the foundation stone and raised the plaque curtain to formally mark the foundation of Khangchendzonga State University.

The foundation stone laying ceremony was joined virtually from the Khangchendzonga State University campus in Tarku, South Sikkim by Minister for Tourism and Industries department and area MLA B.S. Panth, along with panchayats, District Collector Namchi, officers and engineers of the Education department, and local gentry.

Vice President Emphasized The Importance Of Meeting The Future Demands

Vice President M. Venkaiah Naidu, in his address congratulated the people of Sikkim for the foundation laid for the first State university.

He lauded the effort of the State government for its resolve and commitment to establish a State university to offer world class education to the citizens of the State and beyond.

He emphasized on the importance of charting out an academic structure that will meet the demands of the future. He expressed hope that the university will set a new benchmark for quality education in the entire Eastern Himalayan region.

He called for academicians and everyone associated with the university to strive for excellence and contribute to nation building.

The Vice President lauded the State of Sikkim for making a sincere effort towards the implementation of the National Education Policy 2020 in letter and spirit.

He commended the Government of Sikkim for constituting the Sikkim Education Reforms Commission headed by the Chief Minister for sincere implementation of the National Education Policy.

The Vice President further said that education is the most important benchmark for the development of a region.

He said that universities have an enormous role for employment opportunities and to prepare the youth for technological challenges of the 21st century.

The Vice President suggested for incorporation of locally relevant subjects like eco-tourism, horticulture, handicrafts and handloom, in the curriculum of the University. He added that the local talent can be leveraged to build sustainable development models.

He further suggested for collaboration with well-known educational institutions in the country, as well as development of linkages with industries.

He said that education can have a multiplier effect and called for imbibing the principle of ‘think globally act locally’.

The Vice President also called for preservation and promotion of ancient culture and values of the great civilisation of India. He emphasized on the promotion of local language and mother tongue for better articulation of thoughts. He called for reconnecting with the roots and gaining back the lost glory of India.

The Vice President praised the natural beauty of Sikkim and the humility of its people. Stating that peace is a prerequisite for progress, he said that Sikkim has set a unique benchmark in terms of maintaining peace and tranquility.

He also mentioned about the Sikkim government school text books which have been developed according to the sustainable development goals and appreciated about the commendable effort of the government in this regard.

The Vice President in his address made a special mention of the nationwide statistics of States performing exceptionally in higher education, where Sikkim features on the top.

He concluded his address by stating that Sikkim has the ability to become a leader in this region and extended his best wishes to the people.

Governor Ganga Prasad, in his address, expressed his gratitude to the Vice President of India for sparing his valuable time to visit Sikkim and for laying the foundation stone of Khangchendzonga State University.

He said that the establishment of the university will be yet another addition to the existing centres of learning, thus making Sikkim an educational hub in the entire North East region.

The Governor further stressed on the importance of education in nation building.

Speaking on the occasion, Chief Minister Prem Singh Tamang expressed his thankfulness to the Vice President of India M. Venkaiah Naidu for blessing the State with his visit and for laying the foundation stone of Sikkim’s first State university.

He further said that education has been a priority sector of the government and the upcoming Khangchendzonga State University will further open up vistas of opportunities for the future generation.

The Chief Minister in his address also touched upon some of the noteworthy accomplishments of the State Government in the past three years.

He also expressed his gratitude to the Central government for providing consistent support for the development of Sikkim.

The Khangchendzonga State University came into existence in the year 2018 as the only State university of Sikkim. It was established with a vision to fulfil the need and aspirations of the students of Sikkim and North East India to provide a teaching, research and support learning as an affiliating university.

The university is currently headed by Vice Chancellor Prof (Dr) Ashis Sharma who comes with twenty-four years of academic and administrative experience from the renowned Sikkim Manipal University, having held important positions like dean, registrar, and finally director of the reputed Sikkim Manipal Institute of Technology.