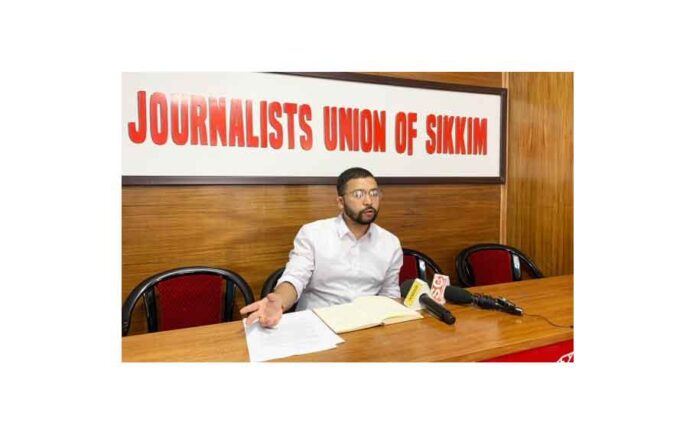 Sikkim: Former Sikkim University Students Association (SUSA) president Mahesh Rai has petitioned Sikkim University to give “complete justice” to the four Geyzing Government College students who missed one whole semester due to their expulsion in 2021.

These four students, expelled in February 2021, were reinstated after they successfully challenged the expulsion orders in the High Court of Sikkim with the verdict given in December 2021.

Speaking to media here on Friday, the former SUSA president said the four students were reinstated by Geyzing Government College and officially given admission in the fifth semester when the new academic session commenced this year.

However, it later emerged that their admission in the 5th semester was in contravention with the existing statutes of the state University since they did not attend 4th semester or gave exams of that semester, he said.

The Geyzing Government College, like other State-run colleges, are affiliated with Sikkim University.

“As such, these four students were not allowed to sit for 5th semester examinations as they were found ineligible to be 5th semester students as per the University’s rules. They have not also received their admit cards,” said Rai.

Here, the former SUSA president insists that it was no fault of these four students that they missed 4th semester in 2021. “They had been wrongly expelled by the college authorities and that is reflected in the court’s verdict.

They got back admission in the college but they suffered punishment of losing one year of studies without their fault. Complete justice must be given to them,” he said.

Mahesh informed that he has submitted a representation to the State University vice chancellor highlighting the “extraordinary” case of the four students.

I have petitioned that these four students should be allowed to continue as 5th semester students as they had no fault for the one-year gap, he said.

To a question, Mahesh replied that the case can be taken up by the Academic Council of the Sikkim University and come up with solutions so that the four students can get “complete justice”.

Mahesh added that he has also written to the Sikkim University vice chancellor to revive the SUSA which is presently run by an adhoc body since 2019.

SIKKIM: CHAMLING DID NOT SPEAK FOR PEOPLE IN ASSEMBLY, COMPLAINS SKM