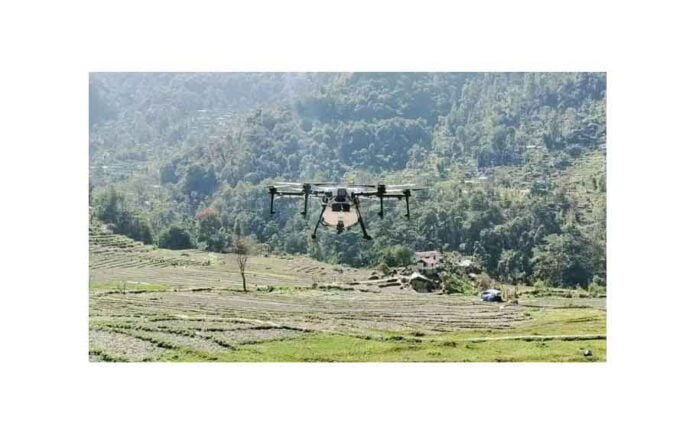 Sikkim Agriculture department is planning to introduce agricultural drone sprayers for the benefit of the farming community of Sikkim.

After taking part in the demonstration, minister Sharma stated that the State government, under the guidance of the Chief Minister Prem Singh Tamang, has been taking numerous initiatives to introduce technology in agriculture and allied sectors for the benefits of the farming community.

Soon after introducing Aquaponics and Hydroponics, the department is planning to introduce advanced drone technology in agriculture which is expected to be remarkably beneficial for aerial spraying purpose as it covers one acre of cultivated land within a short span of seven minutes only.

The device spray, with uniformity and precision, can effectively save both time consumption and manpower, he added.

Sharma stressed on the advantages of amalgamation of technology like drone in agriculture for improving efficiency, productivity, crop yield and profitability for the farmers at large.

He also shared future scope of entrepreneurship development through the use of drone technology in agriculture after its adoption in farming sector in the State.

The minister called FPOs, SHGs and cooperatives to come forward and prepare strategic plan in order to benefit the farmers.

After the demonstration, secretary Rinzing C. Bhutia shared his words in support for a submission of proposal for the use of drone to the Government of India.

He anticipated that the drone would be greatly useful to mitigate the diseases like fall armyworm in maize. The department will coordinate with all concerned and entrepreneurs to take up further course of action accordingly, he added.

The technical expert, Theta Enerlytics director Karan Dhaul drew lights on the advantages and properties of using the drone for agricultural purpose.

Price of Domestic LPG hiked for 2nd time in a row