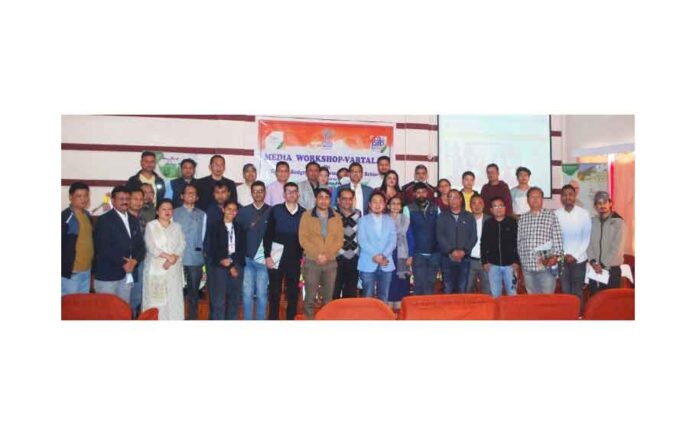 Sikkim Commission for Other Backward Class chairperson Pabitra Bhandari, who was present as the chief guest, stated that the role of media in democracy is crucial and that the State government is trying its best to keep the history of journalism as vibrant as it needs to be.

“Seeing the condition of print media in pitiable condition, the present State government would positively take steps to safeguard its interest if journalists’ associations and other stakeholders come up with positive suggestions,” she said.

Earlier, while presenting keynote address on “General Budget 2022- Leaving No Citizen Behind and prospect of NE Region and Roadmap for Agriculture and prospects of Sikkim”, Prof. Abhijeet Dutt of Department of Commerce, Sikkim University highlighted the background, its source and the sectors where it would be spent.

He stated that the Budget 2022 is futuristic and it would be reflected positively in the long run.

Similarly NABARD DGM Vijay Bhatt presented his address on the roadmap for agriculture and prospects of Sikkim. The general budget of 2022 has many beneficial projects for Sikkim and the Northeast States, he added.
State IEC officer Sonam Bhutia informed that it would be foolhardy to ignore Covid protocol even though its spread has decreased.

“There still is uncertainty about Covid. As such, we must follow Covid appropriate behaviour and remain protected,” he said.

PIB Informed That Media Has An Important Role

Press Club of Sikkim (PIB) presented Shekhar Khawas, while presenting several examples, informed that media has an important role to play in the context of rural development.

Similarly, Journalists Union of Sikkim president Bhim Rawat informed that being complementary to each other, the objective of both the government and private media is to inform the people.

Even though both the government and private media are discharging their duties, private media has comparatively broader reaches, he informed. And since it gathers further importance when the code of conduct is invoked during election time, the government must mentor and give patronage to it, he added.

Earlier, Media & Communication officer from PIB Shillong, Gopajit Das highlighted various welfare schemes of the government and said that the objective of a workshop like “Vartalap” was to further disseminate it to the masses.

The workshop from PIB attended by active journalists of Sikkim was focused on the importance of the role of media in disseminating information of welfare schemes of the government to the people.

It is the fifth edition of Vartalap organised by PIB Gangtok. The workshop was coordinated by senior journalist Suman Gajmer.