Kaju Mysore Pak You Must Try This Diwali; Check Out The Recipe 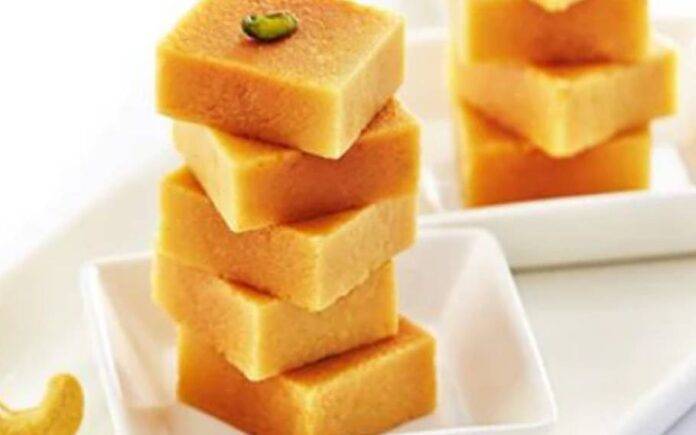 Kaju Mysore Pak is considered as one of the royal sweets. This is made with cashew nut, besan and ghee. This sweet is native to Karnataka and is known for its softness and great taste.

According to the legend, Mysore Pak was first created in the Mysore Palace and was popular as the Royal Sweet.

How to make Kaju Mysore Pak:

Sift the besan and keep ready.

Dissolve sugar in the water over low heat and once it dissolves, increase the heat, bring to a boil and cook till it reaches a one-thread consistency.

Add 1 tablespoon besan and stir to mix well. Continue till all the besan is added, at a tablespoon at a time.

Mix in the kaju. Add the ghee, one tablespoon at a time till all of it is used. The color and texture will change by now. It will get more brown and crumbly.

Set in a thali, patting to level. Do not remove ghee that may float on top, pat it back.

Also Read:ALOO DO PYAZA RECIPE; CHECK IT OUT

Pani Puri Recipe With A Twist; Check It Out

Curd Rice Recipe For Lunch; Check It Out

Egg Sandwich Recipe Shared By Hrithik Roshan; Check It Out

Khoya Kulfi Recipe You Can Try At Home; Check It Out