Did you know that the longest human neck is over 7 inches? 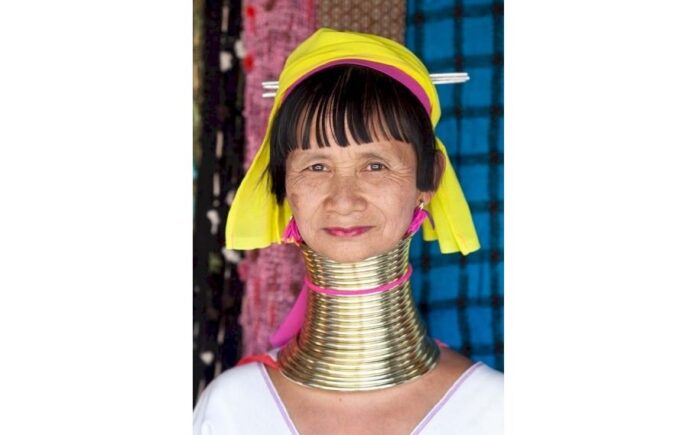 From caves that can swallow entire domed stadiums 23 times over to giant creatures the world has seen some of the most unusual things. This article will introduce you to the women who are said to have the longest human neck in the world.

The longest human neck in the world is over 7 inches:

Padaung women bind their necks with heavy brass rings that alter the shape of the neck and shoulders. According to a study which was conducted in 2018 by researchers from Otsuma Womenʼs University found that these rings had increased the distance from the suprasternal notch to the lower jaw.

Who are Padaung women?

Padaung is a Shan term for the Kayan Lahwi, the group in which women wear the brass neck rings.

The Padaung who are commonly known as the long-necked women, are refugees from Myanmar (also known as Burma) who are famous for their giraffe-like appearance, which is caused by brass rings coiled around their necks.

The longest human neck – The rings are made from coiled brass wire, roughly 1.5 cm (0.6 in) in diameter, that are warmed and bent to follow the shape of the neck. Padaung women are fitted with their first coils between the ages of 5 and 9 years old, with more added as they grow. By the age of 45, Padaung women may have as many as 32 coils wrapped around their neck with a combined weight of 15 kilograms.

The ring increases the credible length of the neck by pressing down on the ribcage and, to a lesser extent, up on the jaw. Over time the weight of the coils distorts the musculature of the shoulders, bends the collarbone and rib cage, and compresses the lower jaw. This creates the impression that the neck has been lengthened, though x-ray investigations have shown that the vertebrae that form the cervical spine are unchanged.

The longest human neck With its traditional values the practice carries great problems to the Padaung women. As they carry the rings on their neck, it leads to respiratory and cardiovascular problems, as well as distorted dental development. Moreover, it has been associated with a significant reduction in life expectancy. As the women carry the accessory throughout their lives, on removing the coils the women are often unable to support the weight of their own heads.

The typical distance from suprasternal notch to the lower jaw is around 8–10 cm, varying somewhat with stature. The effects of the neck extension are even more dramatic when considered as a proportion of overall height. The woman whose neck was measured at 19.7 cm in the 2018 study was only 165 cm (5 ft 4 in) tall.

Girls of the tribe first start to wear rings when they are around 5 years old. As the time passes and they grow older, the coil is replaced by a longer one and more turns are added.

Reason behind the practice:

Accroding to Anthropologists, back in time the rings used to protect women from becoming slaves, making them less attractive to other tribes. It has also been included that the coils originate from the desire to look more attractive by exaggerating sexual dimorphism, as women have more slender necks than men. It has also been suggested that the coils give the women resemblance to a dragon which is an important figure in Kayan folklore.

However, on asking these women about the practice of wearing rings on the neck, they would acknowledge these ideas, and often say that their purpose for wearing the rings is cultural identity.

Also Read: DO YOU KNOW PEOPLE IN OLD PHOTOGRAPHS BARELY SMILED? HERE’S WHY