A resident of the Northeast will be an Indian only if s/he wins the medal, otherwise the insidious people will call him chinky, Chinese-Momos or Corona!! 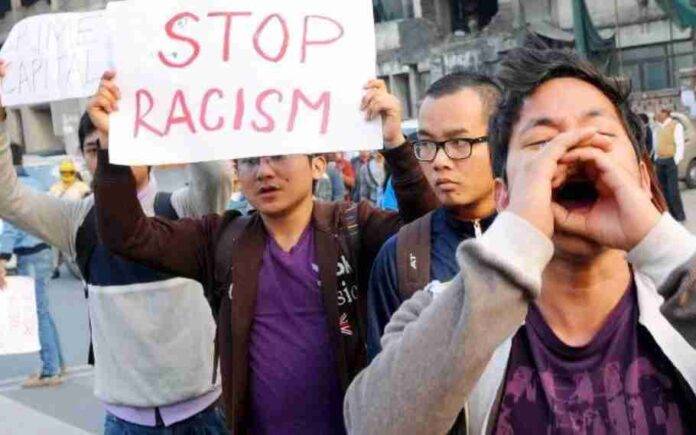 Nagaland Minister from Northeast India joked about the benifits of having ‘small eyes’. Minister Tamjenimna along said, “Because I have small eyes, less dirt enters my eyes. Also, I can easily sleep when I am on the stage and some long programme is going on!” Let’s applaud him for his dark comedy!

Racism to people belonging from the Northeast continues

I strongly feel it’s great vehicle to get a message through. Dark comedy is nothing but errors of society and we need to fix it! “Race is not a biological catagory but it’s a social category.”Racism is a systematic ideology, a complex set of beliefs and practices that, on the presumed basis of biology, divides humanity into the ‘higher’ us and a lower ‘them’.

In a nutshell, it is this: one can tell everything important about a person, his group, its past and future, by noting the colour of his skin. The term is also applied to political, economic, or legal institutions and systems that engage in or perpetuate discrimination on the basis of race or
otherwise reinforce racial inequalities in wealth and income, education, health care, civil rights, and other areas.

According to KM Panikkar, casteism is allegiance to a caste transformed into politics. According to sociologist Kaka Kalelkar, casteism is blind and finite worship of major group, which ignores the propriety, morality and universal fraternity of common norms of justice. The mentality of being brighter in color, meaning belonging to a certain class, is deeply ingrained in us. This same mentality is now going so far as to criminalize certain colors and attack them. This has become a matter of concern not only in India but all over the world. We face color hatred and prejudice and somehow still choose to remain silent about it.

Why we need fair Creams , fair skin treatment? Why we want perticular body type? Why can’t we cancel Hate culture against our own people? Instead of clapping and recognising north east Indians only after winning medals let’s love and treat them as a family, as they are indeed!

Racism is dangerous for-
1. Democracy.

Provisions against racism in Indian constitution

ARTICLE 14 says that no person should be deprived of equality within the territory of India.

ARTICLE 15(1) says that there should be no discrimination on the grounds of religion, race, caste, sex or place of birth and

ARTICLE 15(3) guarantees to make special provisions for
children and women.

ARTICLE 16 ensures the citizens equal opportunities of employment to both the men and women.

ARTICLE 17 abolishes the practice of “untouchability” and any person who practices untouchability shall be punishable under the law.

ARTICLE 21 protects the citizens from deprivation of life and personal liberty.

ARTICLE 46 ensures the protection of the weaker sections of the people the Scheduled Castes and the Scheduled Tribes and promotes provisions with special care to meet their economic and educational interests.

ARTICLE 51(A)(e) signifies the duty of every citizen to the feeling of harmony and brotherhood among all the citizens of India and abandon the practices which are derogatory to the dignity of women.

ARTICLE 243T(4) provides for the reservation of offices of chairpersons in the municipalities for the scheduled castes, scheduled tribes and women as per the manner provided in the state.

The biggest irony against the menace of racism is that these rights are available to the Indian citizens but only against the Indian State! ‘what about the discrimination that is practiced and committed by private individuals?? We need to be loud about it!’ Anonymity on social media world: Presently shades of racism and discrimination are complex and often covert.

Public attitudes to anti-racism have improved, as expressions of racist ideology have become less socially acceptable. Yet, the anonymity of the Internet has allowed racist stereotypes and inaccurate information to spread online. At the onset of the pandemic, traffic to hate sites and specific posts against Asians grew by 200% in the U.S.

A study by The Lancet focussed on the social dimension of the COVID-19 pandemic and the vulnerability of ethnic minorities. The World Health Organization has cautioned on the dangers of profiling and stigmatising communities that can lead to fear and the subsequent concealment of cases and delays in detection. Women and girls also carry a double burden of being exposed to racial and gender-based prejudices. Racial discrimination deepens and fuels inequality in our societies.

Social fixing against Racism –
In January 2021 the World Economic Forum launched a coalition of organizations committed to improving racial and ethnic justice in the workplace. The ‘Black Lives Matter’ protests gained momentum in not only United States but the whole world. People, as well as many governments across different countries, came forth against the prevalence of racial discrimination worldwide.

Through education, particularly the Global Citizenship Education programme, UNESCO works to ensure that schools promote inclusiveness, solidarity, gender equality, the culture of peace and non-violence and respect for others, and provide opportunities for students to reflect and discuss these issues and their personal responsibility.

Through the promotion of tangible and intangible cultural heritage! UNESCO is committed to preserving cultural diversity and respect for others; Through projects such as “The Slave Route: Resistance, Liberty, Heritage”, UNESCO is fighting racism and discrimination with the involvement of cities, museums, site managers and itineraries of memory I would like to conclude that A global culture of tolerance, equality and anti-discrimination should be built first and foremost in the minds of women and men! We need to adopt value called ACCEPTANCE! We shall practice basic acceptance of each individual.”

This world will be better place of we accept and love everyone the way
they are. Let’s practice acceptance!

What to wear in Winter? 5 easy outfits for women