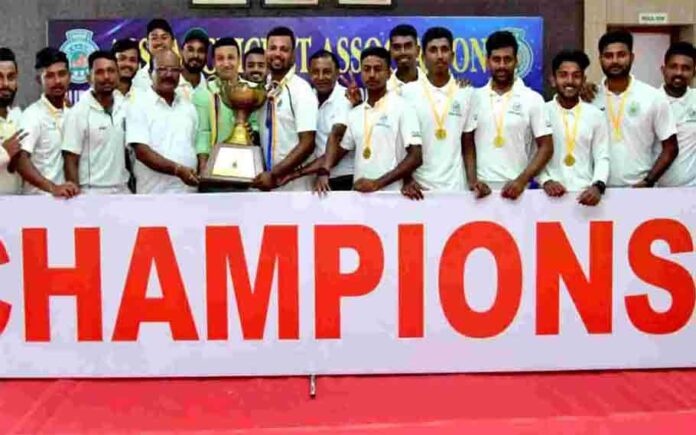 Silchar won the Nuruddin Senior Inter-District Cricket Tournament on June 2nd, defeating Biswanath Chariali in the final by 10 wickets at the ACA Stadium in Barsapara.

Silchar won the Nuruddin Trophy for the 2nd time

Moreover, Silchar won the title for the second time. They had previously won the prestigious trophy in 2008.

The 4 final lasted only two and a half days because Biswanath Chariali’s batting in both innings was not up to the mark.

In the first innings, the team scored 122 runs, and in the second, they scored 140. Biswanath began the morning with a score of 90-4 and lost the first wicket when the score was 94. After that, the competition was completely one-sided. They added only 22 runs after losing their next four wickets.

The total was made respectable by a 26-run partnership between Asarjo Ganthal and Mintu Kumar Roy for the penultimate wicket. In the second innings, Ram Das produced a fantastic bowling performance, picking up five wickets for only 15 runs. Rahul Singh, the final man of the match, scored 3-36.

Silchar needed 40 runs to win the tie, and they got there in 29 balls, losing only one wicket. With 25 and 16 runs respectively, Abhisekh Thakuri and Subham Mandal were still not out.

The concluding ceremony was attended by the president of the Assam Cricket Association, Romen Dutta, as well as other association leaders. Biswanath Chariali’s Bikash Kurmi (369 runs) was named the tournament’s top batsman. The best bowler title went to Silchar’s Rahul Singh, who took 43 wickets.