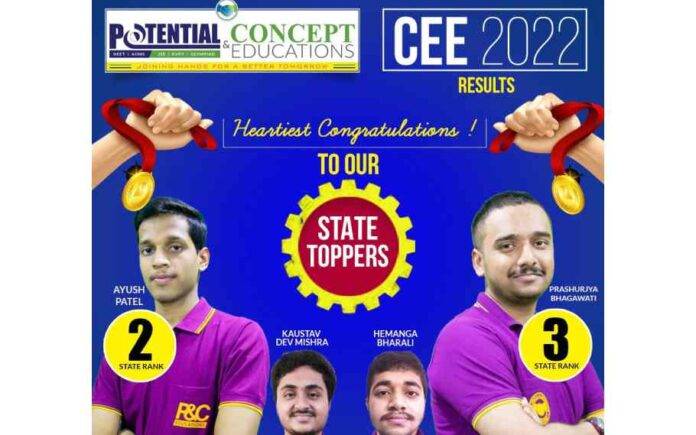 Potential and Concept Educations produces the best results in JEE MAINS and CEE 2022; The National Testing Agency (NTA) released the results of JEE MAINS 2022 on 8th August 2022. JEE main is the entrance exam for admission into undergraduate engineering courses across the country in the National Institutes of Technology (NIT) and other reputed government and semi-government engineering colleges. Like every year, this year too Potential & Concept Educations have proved their dominance in competitive education in the North East region.

Potential and Concept Educations announces the list of toppers

The institute topper “Ayush Patel” who scored 99.90 percentile said that, “there are ambiguities in certain questions and the answers in the Session II Paper as per answer key released by NTA, which if corrected, I am sure to get a better score and percentile”. Almost 3 lakh candidates from across the country are challenging the answer key released by NTA in the July attempt paper. The students have taken up Twitter to reach out to NTA for the same.

The Assam Science and Technology University (ASTU) released the results of the Combined Entrance Examination (CEE) 2022 on 10th August 2022. CEE is conducted by ASTU for admission into the 7 premier government engineering colleges in Assam. The test is taken after the 12th grade for admission to graduation courses. The institute informed that 4 of their students have been able to secure ranks under the Top 20 -Ayush Patel: State Rank 2, Prashurjya Bhagawati: State Rank 3, Kaustuv Devmishra: State Rank 11, and, Hemanga Bharali, State Rank 18.

The institute management informed that this year has been a great year for them as their students have performed excellently in both JEE Main 2022 and CEE 2022. Drawing attention to the fact that, they have produced not just one or two but multiple toppers whose percentiles are very close to each other. This only shows, how they equally focus to mentor and guiding all the students with their very experienced team of Academic & Non-Academic teams. Also, the institute has been consistently producing the best qualitative and quantitative results for the last 15+ Years.

Competitive education has been constantly growing in the state and coaching has become an undisputable necessity these days for students to have a real chance due to the immense competition for a limited number of seats. High-paying job offers and higher education prospects that open up once a student completes a UG course at national-level colleges like IIT or NIT are the reason behind the aspiration for these institutes among students and parents.

Premier institutes like Potential and Concept education is leading from the front in the North-eastern region and constantly evolving with new technology and creating the best pool of academicians from across the country. Their stupendous results over the years are a source of constant inspiration for the students and teachers community of the entire region.

Also Read : “One nation, one entrance”; Govt. plans to merge JEE and NEET into CUET