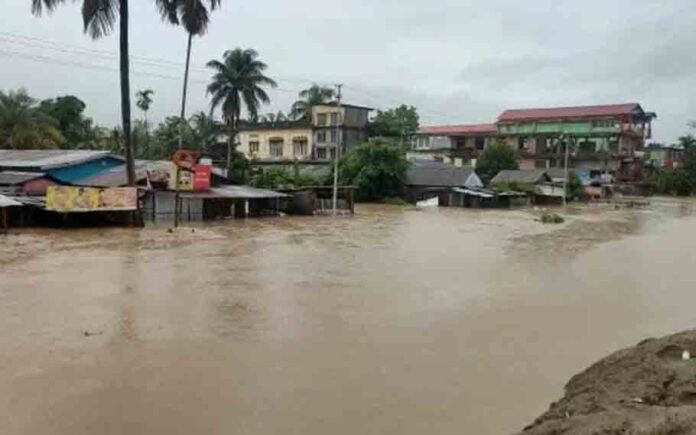 One of the world’s largest rivers, the Brahmaputra, as well as its tributaries, the Gabharu, Belsiri, Depota, Jiabharali, Ghiladhari, Buroi, Brahmajan, Solengi, Chatrang, Sessa, and others, run through the Assam districts of Sonitpur and Biswanath. The main issues that these rivers in the Districts generate are flood and erosion.

The flood situation in the Gohpur subdivision under Biswanath district remained critical and unchanged till the filing of this report.

The lives of inhabitants have been completely disrupted by the unexpected rise in water levels that flow through the subdivision. According to sources, a considerable number of areas in Gohpur were swamped by flood water, leaving the residents in a dreadful situation.

National Highways have been disconnected and communication on the highways was also hampered in certain areas since water washed away a portion of main roads. On the other hand, the floodwaters severely damaged a number of areas of Gohpur town. Several dykes were breached by the rushing water. Schools apparently received flood water as well.

Moreover, people are currently suffering from a lack of drinking water and electricity everywhere. Many markets and shops are shut down in various locations. As a result, there is a universal scream for food, water, baby food, and animal food.

Further, there is no vacant space in the relief camps in the towns in some areas, and the children and the elderly have to be taken up on the open roof. However, several family members are required to reside together. The residents of the low-lying homes, who effectively lost everything, have turned to beg.

Moreover, today around 10.30 AM, 4 workmen were buried due to a sudden landslide at the WTP site of the water supply to Holongi Airport in Hollongi. Fortunately, 3 individuals were rescued; however, Naru Goru (Age-37) of West Bengal is still missing as of noon.

The retrieving procedure is taking longer than expected due to heavy rain and fears of additional landslides. Of the three people who have been found, two have been transported to Gohpur, Assam, to seek medical attention.

However, even a small amount of assistance at this critical moment could save many lives. And therefore make a request to all youths to publicly endorse the defenseless individuals impacted by the horrific Assam flood.