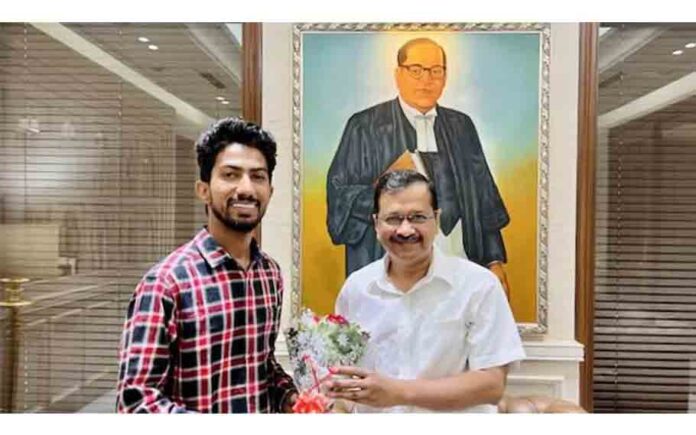 “With the exception of AAP, I have never seen a politician appeal for votes by saying, ‘If you don’t like my work, don’t vote for me next time.’ “They impacted me in some way, and it caused me to join the party,” Shyam Rangeela explained.

While the party has not granted him a “specific role,” he has shown a desire to work on his own. “Famous comedian Shyam Rangeela of Rajasthan joins AAP!” tweeted AAP, confirming his joining. “Shyam Rangeela has been bringing smiles to the faces of people through his satires. Now, through his art, he will shed light on the education and health revolution in the state in association with Aam Aadmi Party.”

Rangeela praised the AAP’s performance in Delhi, saying the party does not play the blame game like other political parties. “Based on its developmental activities in Delhi, I would have supported AAP regardless of its triumph in the recent Punjab elections,” he remarked.

“The people of Rajasthan are also demanding a leadership change and are willing to give AAP a chance this time.” If the AAP does not perform well in the state after five years, people will have alternative parties to choose from, and I will go my own way,” he stated.

However, he has no immediate plans to run for office and has stated that he will work independently.

During the 2014 general elections, Rangeela voted for the Bharatiya Janata Party. He claimed that discussions of development and transformation had impacted him. “In 2014, I attended rallies and worked for the BJP on my own.” He stated, “No one from the party-appointed me for that.”

He was affected by the country’s anticipation of change at the time. “The price of petrol and diesel is rising every day, and it will continue to rise for a variety of reasons. The true issue arises when the BJP refuses to answer questions, he claims.

He also highlighted worries about censorship of his shows, claiming that while directors and producers invite him to shows, the channels refuse to let him in when he asks for permission. “In 2017, my performance at a comedy concert was canceled.” He stated, “This never happened before 2014.”

When asked whether he will be considered as the next Kumar Vishwas in AAP, Rangeela said, “He (Vishwas) is very experienced and I have followed his footsteps and learned from him. I shouldn’t be compared with him.”

Also Read: AAP TO FIGHT ANY MOVE TO REMOVE LOUDSPEAKERS IN DELHI, 2022