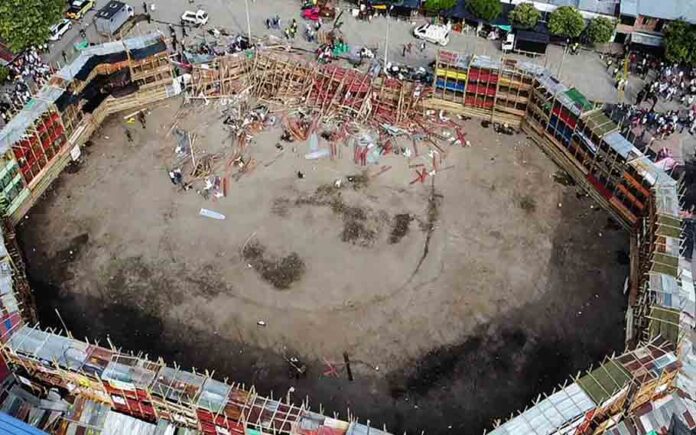 Authorities in Colombia reported that hundreds of people were hurt and four people died when a stand collapsed during a bullfight. According to regional health secretary Martha Palacios, an 18-month-old baby was among those killed in the bullfight that took place in the town of El Espinal in the Tolima department of central Colombia.

Numerous people were knocked to the ground as a three-story section of wooden stands collapsed.

“Four people are among the dead at the present moment. Two women, one man and one minor,” Tolima governor Jose Ricardo Orozco told Blu Radio.

“Around 30 people have been seriously injured… this is a preliminary report, injured people are still being transferred,” the governor added.

The regional administration will take action to outlaw “Corralejo,” where locals do amateur bullfighting, according to Orozco. Moreover, a bull from the fight had reportedly escaped the arena, according to a Colombian newspaper, and the municipality had been put on high alert.

Ivan Ferney Rojas, a member of the city council, issued a dire warning about the hospital and ambulance services in the community. “We need support from neighboring hospitals and ambulances. Many people are yet to receive care,” he said.

Although it was first believed that 30 individuals had suffered significant injuries, late Sunday Tolima health secretary Martha Palacios stated that 322 people had received treatment at nearby public and private institutions as a result of the fall.