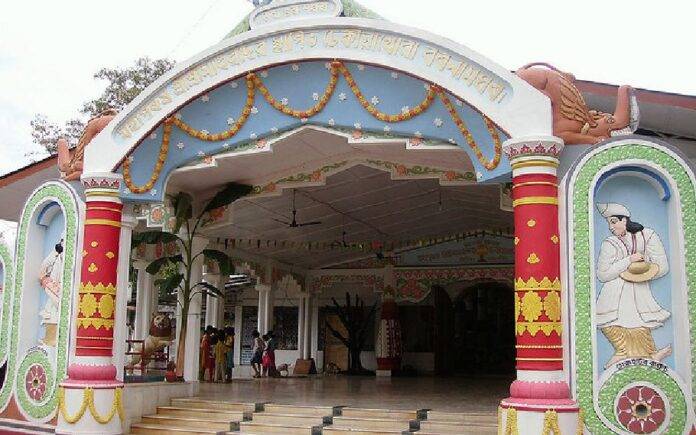 Have you heard about Dhekiakhowa Bornamghar, the one which is unique of them all? Assam is home to plenty of exquisite holy places that will fill you with a sense of divinity. Besides rich biodiversity and its world-famous tea, Assam is also renowned as a location of historical significance, with several ancient myths and stories concealed throughout the region. With the faith of people over their religion, there are numerous ancient holy shrines in the state.

Situated in the district of Jorhat in the Dhekiakhowa village in Assam, Dhekiakhowa Bornamghar was established by saint-reformer Madhavdeva in 1528 and is counted amongst the holiest places in the state. It is located 15 km to the east of Jorhat city 3.5 km away from National Highway 37.

An earthen lamp that has been burning for ages:

According to the committee members of the Namghar, Madhavdeva kindled an earthen lamp and since then the lamp never stopped burning. Continuing the legacy, the priests have been refuelling the earthen lamp with mustard oil for ages.

The Namgar is situated in a complex of facilities spread over 13 bighas of land. The Namgar and other facilities are maintained by a managing committee with donations from devotees. Besides the maintenance of the complex, the managing committee sponsors various social and cultural programs. Due to the large campus and historical association, Namghar is called Bornaamghar.

It is to be noted that there lies a reason behind the naming of Dhekiakhowa Namghar. It traces back to the time when Guru Madhavdeva after taking up the duty of reforming people and spreading the Ekasarana Naam Dharma came to stay in this small village. He took shelter for the night at the hut of an old woman, who served him rice with Dhekia Saak (Fiddlehead Fern), a very common wild vegetable. The old woman got very embarrassed to have served the Saint guru with something like that. However, on seeing her dedication towards her guest, Madhavdeva was immensely pleased. Hereafter, he started a namghar there and gave the responsibility of kindling the earthen lamp to the old woman. The naamghar was later known as Dhekiakhowa Naamghar.

Tales related to the Namghar:

Dhekiakhowa Bornamghar is located very close to National Highway 37. It is around 15 km east of the town of Jorhat and the site enjoys good connectivity via state and local buses. From Jorhat Airport, you can avail yourself the rental cars to reach Dhekiakhowa Bornamghar.

The best time to visit this namghar is during the winter. Winters set in from the end of October and continue till the end of March. The weather is pleasant during this time with scanty rainfall or no rainfall at all.

In today’s busy world people are often in search of spiritual getaways to get relief from the hurdles and tensions of their life and Assam is one such ideal. The Eastern Indian state of Assam has variations of several religions and cultures that flourished in its lap over passing time. People from different places visit the Namghar to seek divine blessings from the almighty.