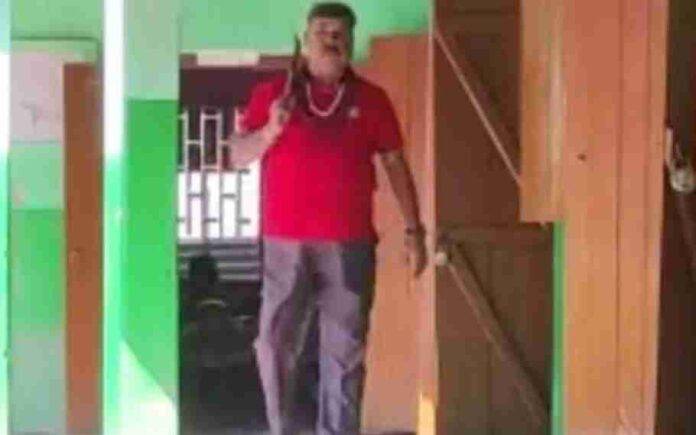 Assam teacher brings machete to school in Assam’s Cachar district. Later, the teacher was rusticated. The teacher has been identified as Dhritimedha Das, hailing from Tarapur Area in Silchar who has been working as a teacher for over 11 years.

A video of the same has been doing rounds on the internet after which the police had to intervene and the accused was detained.

As per reports, the officials from Silchar’s Rangirkhari police outpost said they received calls from Radhamadhab Buniyadi School on Saturday morning about the incident and a team rushed to take control of the situation.

“The headteacher tried to hide the weapon and acted like everything was normal. But we noticed fear amongst the students and other teachers after entering the school,” police said. “We detained him inside the school briefly, collected the weapon and asked the education department to take further action,” added police.

Cachar district’s Deputy Inspector of Schools, Parvez Neehal Hazari said the incident resulted in the head teacher being angry and frustrated because of irregularities by other teachers.

Additionally, the police reports also reveal some notes which have been found in the possession of the accused, in which he blamed four teachers of the school if something happens to him. On another note, he reportedly said that he wants to kill three teachers.