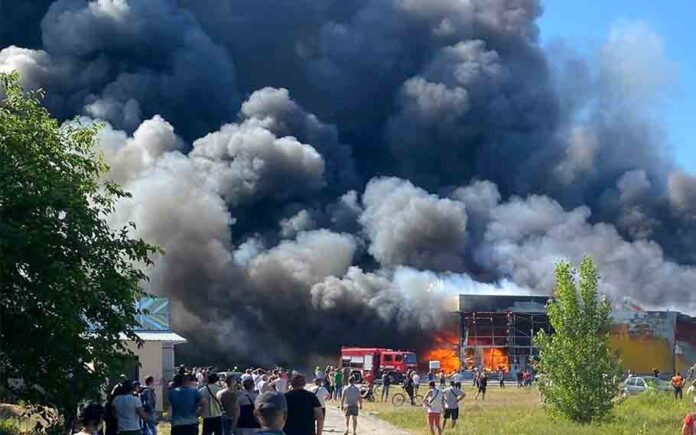 Russian troops struck a shopping center in Kremenchuk in the Poltava region with at least two Russian missiles on Monday afternoon with over a thousand people inside, Ukrainian authorities claim.

According to the most recent information that was made available early on Tuesday morning, at least 16 individuals were killed and 60 or so were injured during the strike.

Local authorities reported the previous evening that at least 25 casualties of the Russian missile hit were hospitalized, with several of them reportedly in critical condition.

The casualty figures were changing as rescuers searched the smoldering rubble into early Tuesday. Soldiers worked into the night to lug sheets of twisted metal and broken concrete, as one drilled into what remained of the shopping center’s roof.

Images and video taken at the site reveal that the entire shopping center was ablaze, with emergency personnel and bystanders attempting to aid the victims.

The incident was reminiscent of earlier assaults on civilian sites since Russia invaded Ukraine on February 24. One such Russian missile attack was an airstrike that occurred in March on the Drama Theatre in Mariupol, an eastern port city, which killed over 600 people who were taking refuge there.

According to Zelenskyy, the Amstor shopping center posed “no threat to the Russian army” and had “no strategic value,” and the attack’s main objective was to prevent “people’s attempts to live a normal life, which make the occupiers so angry.”

Kremenchuk right now… 🇷🇺deliberately hit shopping center, with more than thousand civilians inside. In the middle of the day. Just because it wants to kill. To fill everything up with Ukrainian blood. RF – a terrorist state. RF – the most disgusting war.#RussiaIsATerroristState pic.twitter.com/nwAYQCrImb

In a second Telegram video on Monday night, Zelenskyy further decried the attack as a “brazen act of terrorism” against “a peaceful town and an ordinary shopping center.”

The attack on Kremenchuk, a significant industrial center in central Ukraine and the site of that country’s largest refinery, happened the day after Russian missiles struck a neighborhood in Kyiv, the capital.