Did you know Prince Harry and Meghan Markle are related? 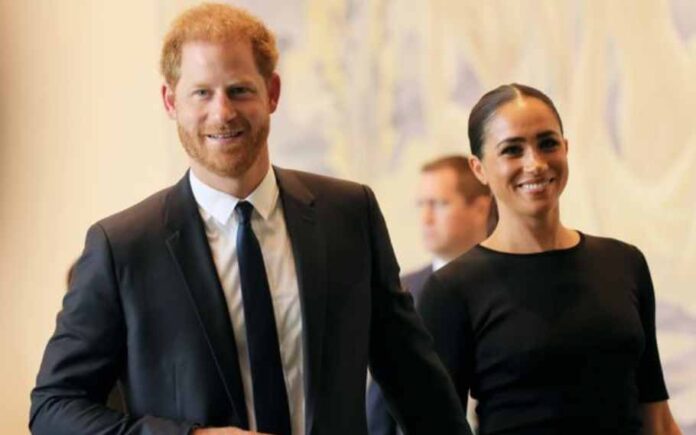 Prince Harry and Meghan Markle have stayed in the limelight since they officially announced their relationship in front of all. But did you know that both of them are related to each other before tying the knot?

Prince Harry and Meghan Markle are cousins before partners?

It’s been just 3 years since Prince Harry and Meghan Markle got hitched but it seems like they have been related even earlier. Just after the news of their engagement came out in November 2017, some avid royal family fans have dug up information and found out how the couple already has a connection. Hereafter, it was revealed that both of them are indeed related by some family strings.

According to a report, Ralph Bowes who was born in Streatlam, County Durham in 1480 and served as the High Sheriff of the region is the missing piece of the puzzle in explaining how the royal couple is connected. Bowes was both Prince Harry and Meghan Markle’s great grandfather from 14 generations earlier.

The family tree reminds long back to the Queen Mother, Elizabeth Bowes-Lyon’s lineage on Prince Harry’s side. Thomas Markle, Meghan’s father can be traced back to an Englishman called Ralph Bowes whose estates passed down to Sir George Bowes due to succession of males’ heirs and who was related to the Queen Mother, too.

The descents of Harry and Meghan can be spoored back to Hundreds of years when Elizabeth became as her daughter was crowned Queen Elizabeth II in 1952. Prince Harry was born to Prince Charles and Lady Diana Spencer in 1894 and the Queen became his grandmother.

Speaking of Meghan, the Duchess found her lineage from hundreds of years ago when her ancestors first started living in America. It is said that Sheriff Ralph Bowes’ granddaughter was married to John Hussey of Dorking in Surrey. Hussey’s grandson Christopher Hussey made a move to America in 1632 and was one of the people who found Nantucket in Massachusetts. According to a report by Mail Online, this was the family who afterwards gave birth to Meghan Markle.

For the first time Prince Harry and Meghan Markle met in 2016 when one of their mutual friends set them both to a blind date. During the couple’s first sit-down interview with the BBC after they announced their engagement Harry said, “We were introduced actually by a mutual friend.” Despite all the fame bagged by Prince Harry, Meghan in the interview said that she didn’t really know how Harry was before they met. But once they did, the two got along immediately.

Hereafter, things flashed around quickly. The couple went on a second date and Prince Harry then invited Markle to accompany him on a trip to Africa just three or four weeks later. Markle and Harry made their first public appearance as a couple at the annual Audi Polo Challenge in Ascot, England. As Harry participated in the games, Markle, wearing a chic navy dress and white blazer, cheered on her prince from the sidelines. The couple was later snapped engaging in some PDA off-site in the polo parking lot.

On May 19, 2018 Prince Harry and Meghan Markle finally tied the knot in St George’s Chapel at Windsor Castle in the United Kingdom. On the early hours of the big day, Prince Harry’s grandmother, Queen Elizabeth II, conferred upon him the titles of Duke of Sussex, Earl of Dumbarton and Baron Kilkeel. Besides, Harry and Meghan paid tribute to Princess Diana on their wedding day. Meghan and Harry’s first reception took place at St. George’s Hall, a state room within Windsor Castle where more than 600 guests were invited to the ceremony and then lunch, which was hosted by the Queen. The wedding was televised and live streamed around the world.