Do you know about North-East’s first Bamboo Industrial Park which will come up in Dima Hasao? 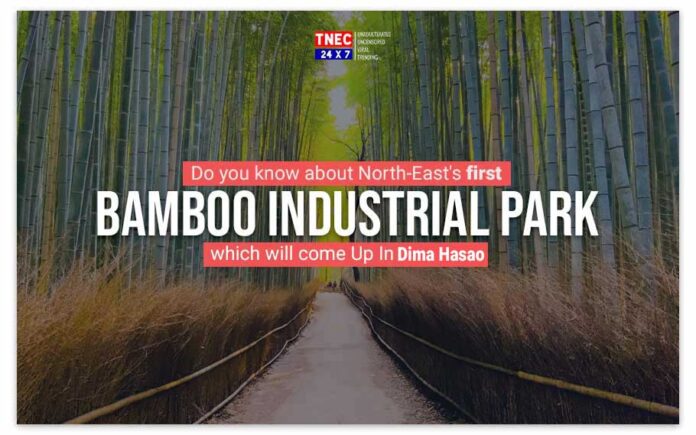 By: Drishika Deka, The North-Eastern Chronicle

India ranks second after China in terms of bamboo diversity. The North-Eastern states are the home to 58 bamboo varieties. More than 50% of the bamboo species grow in North Eastern part of India, viz. Arunachal Pradesh, Assam, Manipur, Meghalaya, Nagaland, Sikkim and Tripura.

The main reason behind the abundance in bamboo plantation in the North-Eastern states is due to the wet climate and the moist as well as fertile soil that further results to the growth of the plant species. Before, bamboo was also known as the poor man’s timber. But the increasing uses and importance have now given a complete different shape to the bamboo cultivation.

This special plantation is responsible for the country’s rural economic development to a certain extent. The huge varieties of bamboo found in the North Eastern part contribute towards the food and nutritional security of the tribal region.

Some Names Of Bamboo Found In Assam

Some Uses of Bamboo

It also has its industrial uses as over the years, some bamboo items are being increasingly manufactured by some small scale industries for making various other essentials and equipments.

Apart from that, bamboo is also used widely for making paper. The locals use bamboo shoots to make tasty bamboo pickle which is quite popular among the North-Eastern tribes.

The bamboo artisans of the various North-Eastern states

We have various numbers of skilled artisans in our state. Our Honorable PM of India, Narendra Modi stated about adding value to the various bamboo products in the various North-Eastern states and that would be a tremendous step towards making the country independent( Atmanirbhar) in terms of economy.

He also stated about the various skilled artisans of the North East region that have special skills in constructing various useful items and essentials like tiffin boxes, bamboo baskets, etc.

Bamboo is an important source of livelihood for the people in the region. He also added the perks of bamboo being environment friendly as well as hygienic. Bamboo can also be listed as a sustainable resource that adds more to its benefit.

The central government has taken a good initiative to set up the first Bamboo Industrial Park in Dima Hasao district taking in consideration, the potentiality of the varieties of bamboos found in the state. Once the setting up of the Industrial Park is completed, it would usher a new era and growth in the region’s economy.

This will also increase the employment opportunities for the local people. Previously, we could only see the vast production of Bamboo and its export to the various paper mills but after the completion of the setting up of the Bamboo Industrial Park, various other bamboo products like tiles, ceiling etc could also be made, which will ultimately lead to large amount of economic benefit for the people of the region.

On 26 July 2021, Assam CM Himanta Biswa Sarma, laid the foundation stone of the Bamboo Industrial Park at Dima Hasao.
It will cover an area of 75 hectares and will contribute efficiently for the benefit of the bamboo growers of the state.

It will also encourage the local youth towards the bamboo sector and will lead to the overall economic development of the state.

The Bamboo Industrial Park will be commissioned within 2 years and will be an environment-friendly complex spread over a sprawling area of 60 bighas of developed land. It is also expected that around 24 industrial units will come up in the area and would help in the production of large amount of bamboo based products like furniture, handicrafts etc.

Bamboo is slowly and steadily taking up the place for wood and it is a good thing. A number of bamboo manufacturing units have been established in the various places of the North East. These have lead to the increasing employment opportunities for the youth as well as for the local people.

It will also lead to the achievement of a tremendous amount of profit for the region. For the North-Eastern states, bamboo is quite considerably an important resource and as well as an important source of livelihood among the locals. From “The poor man’s timber”, Bamboo is now known as the “GREEN GOLD”, as it has gained large amount of importance as an industrial raw material which can contribute towards tremendous amount of prosperity in the global market.

Also Read: Yelhomie: Nobody from the Northeast