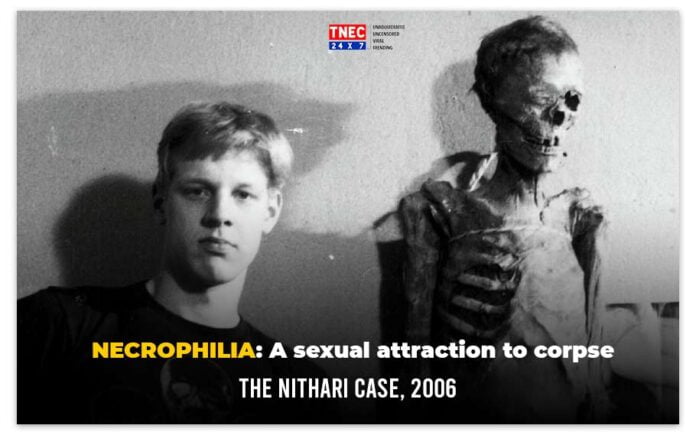 Our surroundings have seen incidents that are darker and worse from one another. In a place like India where an individual’s rapacity of lust and sexual desire had made all women think twice before stepping out of the house, an incident took place that left the entire nation flabbergasted and to think if there could have been something worse than this.

In the year 2006, residents from Nithari Village in Noida, Delhi lodged FIR as a number of children went missing. Even after repeated visits, the local authorities were allegedly ignoring the concern after which the villagers sought the help of former Resident Welfare Association (RWA) President S C Mishra. That morning, Mishra and the two residents searched the tank drain. One of the residents claimed to have found a decomposed hand, after which they contacted the police.

Anxious parents of children missing in the last two years rushed to Nithari with photographs. Koli, under alias Satish, later confessed to killing six children and a 20-year-old woman referred to as “Payal” after sexually assaulting them. It was discovered that the duo used to murder the girls and thereafter had sexual intercourse with the body.

Later, the police recovered a number of pornographic CDs, and pictures of naked children and women were recovered by the police officials from their house. Hereafter, a case was registered against Kohli under various sections of the IPC, including rape, murder, kidnapping, and criminal conspiracy.

Nevertheless, it was not easy for the CBI to charge the culprits with the shameful and heinous act of necrophilia for there were no well-defined laws in the country dealing with the crime.

The panel of the central Government met the parents of the victims to record their statements even after the investigation. Parents of eight of the sexually abused children were given compensation of Rs. 12 lakhs. The DNA samples from the human remains were sent to a forensic laboratory in Hyderabad for the identification of the victims while forensic samples were sent to the laboratory in Agra for determining the age, cause of death, and other details. It was determined that “Payal” was the only adult victim identified, with all other 11 victims below the age of 10.

Out of the eight, seven families were provided compensation money. However, on January 3, 2007, they returned their cheques in protest. Nevertheless, the cheques were soon returned to them as they demanded houses and jobs in compensation as well.

Necrophilia is an act or desire of coming into sexual contact with the remains. It can also be termed as a disorder there is an abnormal fantasy of lovemaking with a corpse.

The Barbaric act of Necrophilia is prevalent across the globe and it has mandated certain countries to pass strict legislation. But to some extent, it must be noted that most countries do not categorize such an eerie act as a crime.

Even in a country like India where the rate of Necrophilia has seen a drastic rise over the decades, has failed to pass a justified law in this regard. Although this act is penalized in a sense, under Section 297 of the Indian Penal Code, in the form of the offense of “Trespassing on burial places, etc.”; there lie several limitations with the mentioned provision. Citing the crime the punishment served is of a much lesser degree than would be required to inculcate a sense of deterrence in the offender.

It is so sad to say that one doesn’t seek peace even after death. The above-mentioned was just a single occurrence, besides there are thousands of others that are not even known. India has been witnessing a rising number of cases of necrophilia over the past decade but still, we lack precise law for the same.