‘Money heist’ Fans are going crazy after the release of action-packed trailer of the last and 5th season! Here’s what you should know 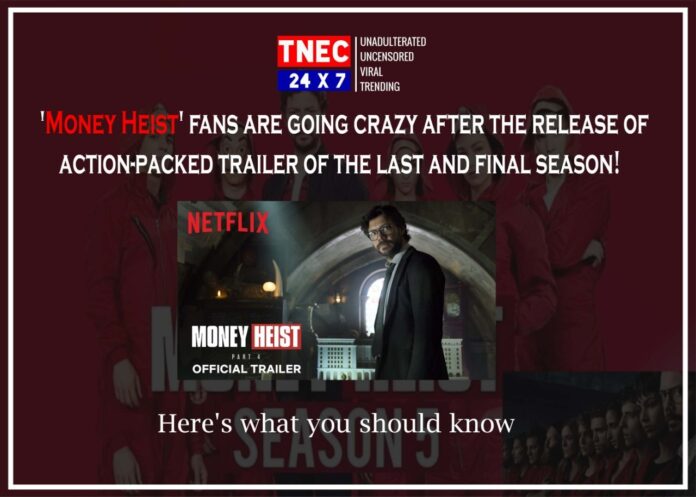 Money Heist is a Spanish series available with English subtitles which have attracted views all over the world. The last and final season trailer is launched and as we know it is loaded with intense action.

Netflix has unveiled the 90-seconds first trailer of the first half of the show. The show will be launched in two parts. The trailer gives us a glimpse of what to expect in the upcoming season of Álex Pina’s hit thriller show ‘Money Heist’ also known as La Casa de Papel in Spanish.

In the trailer we can hear, “Locked up for a hundred hours, trapped, about to be killed, and having lost a best friend, it feels like a hundred years have gone by,” an unseen voice says before Alicia confronts The Professor: “Checkmate.” The Spanish authority sends military cops Alicia Sierra (Najwa Nimri) to gain the upper hand by arresting The Professor (Álvaro Morte).

Police realize where they are and where they wanted to be and push on with the military: They’ll come out victorious or come out dead.” As usual, the confrontation is brutal, with heavy casualties on both sides.

We can see Sergio aka the professor is handcuffed, chained, and tortured by inspector Alicia Sierra. Now it will be interesting to see the professor’s mastermind plans to escape as he gets over it every time things get awry.

Last July, makers gave a heads up for the release of the final season and the end of the robbery at the banks of Spain by the gang.
In 2017, Netflix acquired the show and recut the original 15 episodes in 22.

The last and final season will be realized in two volumes with five episodes each on 3 September and 3 December 2021 respectively.

Fans wait patiently for the last season of the thriller series. The trailer may have given us an idea but who dies at the end and who survives will be interesting to watch.