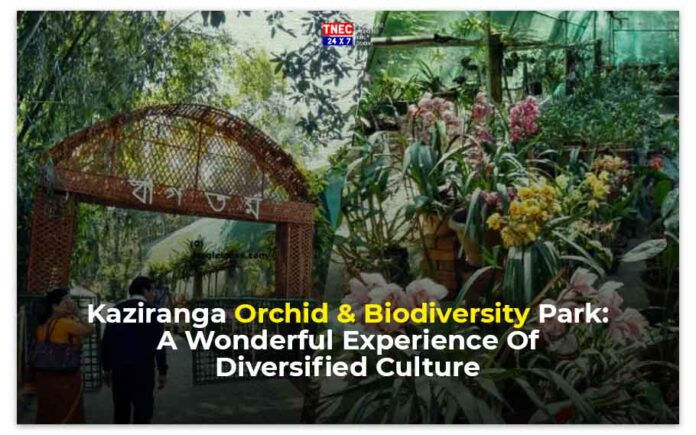 The Kaziranga National Orchid and Biodiversity Park is home to more than 600 species of wild orchids collected from across the world with an area of 16 Bighas and is based at a distance of 2 kilometers, from Kohora Chariali.

The team of The North-Eastern Chronicle visited the place on September 15, 2021, and were completely astounded by the rich culture and ethnicity the place holds. Besides the rich and eye-catching natural resources, the park offers a treat of versatile art and culture to its visitors.

The stage offers various forms of dance from the land of Assam. This article is to provide a short write-up on some of the dances performances:

Sattriya Nritya (সত্ৰীয়া নৃত্য): It is the age-old traditional form of performing art is a prime Indian Classical form of dance to be counted along with the other 7 forms of highbrow classical arts of the nation.

Although the dance form was in practice since the 15th century, it was only November 15, in the year 2000 when it got full-fledged recognition as a classical dance form by the Sangeet Natak Akademi.

The dance form is composed of different treatises some of which are, Jhumura Nritya, Nadubhangi Nritya, Gopi Nas, etc. This reflects the rich cultural heritage of Assam.

Bihu (বিহু): The Bihu is a popular and prominent folk dance in Assam. It is mostly performed during the annual Bihu festival in April in Assam and is an integral part of Assamese culture.

Banjar kekan or Bamboo dance: It is a folk dance form of the Karbi community that is generally performed by a group of dancers. Bamboos are used in the performance of the dance, from which the dance is named so. Both men and women come together to perform the same.

Here the subjects and themes of the songs are varied. They include the life of a man, his sufferings in this life, and his death.

Apart from them, the songs describe the matters of individual love and affection including joy and pain. Instruments like the dhul, taal, gong, and gungang, or gogona are used.

Amidst the prevalence of modernization across the state, the place has managed to hold the ethnicity of the culture of the land of Assam that must be appreciated.

Also Read: ARE YOU A SELF-OBSESSED TRAVEL ADDICT? HAVE A LOOK AT THESE DESTINATIONS BEFORE YOU WALK DOWN THE AISLE