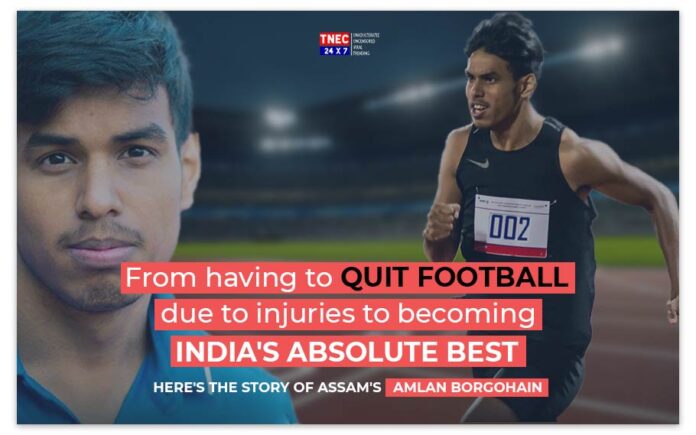 Following the footsteps of Hima Das, Amlan Borgohain, an athlete from Assam, has displayed some spectacular performance at the 60th senior National Athletics meet and won a gold medal in 200 metres event in Telangana on Sunday. Amlan, the pride of Assam, has clocked a meet best of 20.75 sec at the finals of the 200 m showdown.

Moreover, this was his second medal at this event. He had previously won the Silver in the 100 m event. The whole journey of Amlan in the National Open Championship was something where he proved to be his best performance with extremely commendable efforts as he successfully emerged as a champion on the final day.

“I was getting injured very often while playing football and my mum did not like it. You know how moms are, right?” says Amlan. With regular injuries on his feet, Amlan’s mother could no longer watch her son from the sidelines, and decided to step in.

“My mom asked me to either switch to a different sport or quit entirely. Playing football wasn’t an option anymore. It was a tough decision to make,” recalls Amlan, who’s a massive Cristiano Ronaldo and Sunil Chhetri fanboy. His search for a contactless sport ended with running and he says it was an easy choice to make. This is because, after his first school meet he realised, running toned with the adrenaline kick he received from football.

“You can say football is banned for me right now. I watch a lot of football,” says Amlan. However, even now, during his free time, Amlan does like to knock around the football in his room.

Amlan, who has lived in Hyderabad since 2014, was looking for some guide who could help him progress to the next level, and this is when James Hillier who’s the head coach at Reliance Foundation Odisha Athletics High-Performance Centre at Bhubaneswar spotted him during a competition in July 2019. The veteran Welsh coach has mentored the likes of Rio Olympics 400m relay bronze medallist Emily Diamond.

Followed by further evaluation, 23-year old Amlan got inducted into the training centre at Bhubaneswar in early part of the year 2020. Amlan, who had arrived at the centre with a personal best of 21.89s, has immensely impressed his Welsh coach. However, Hillier believes there is a lot of room for improvement.

“He arrived with a 13 percent body fat and now it’s seven (the same as his idol Ronaldo’s). His muscle mass has also increased. There are no specific areas but I would say we will work on every aspect. I will not give you a number as to how much he can improve because that is like limiting his potential,” says the 43-year-old coach.

Amlan, who has been training at the Reliance Foundation Odisha Athletics High-Performance Centre (HPC) in Bhubaneswar since April 2020, decimated the rest of the field in a sizzling performance.

“I expected to dominate the race,” said a confident Borgohain after his victory. “My coach said you can win the race in the call room and that’s what I did with my presence and confidence. I was happy with my performance but I made a few technical errors so I know I can still run much faster. Over the last few months I have made improvements in my speed, endurance and my finishing speed. It is something me and my coach have been specifically working on for this competition.”

“Firstly, it was a significant improvement on his personal best and secondly the manner and confidence in which he really owned the race from start to finish was very impressive,” said James Hillier, Head Coach, Reliance Foundation Odisha Athletics High-Performance Centre. “It was fascinating to note that he was the only non-international in the race and the least experienced. However, he oozed class that made it look like he was the most experienced campaigner in the field.“

Coach Hillier has expressed his desire to take Amlan to Europe so that he (Amlan) can gain experience from competing in the European Circuit against quality foreign athletes.

Also Read: Virat Kohli to step down as RCB captain after end of IPL 2021