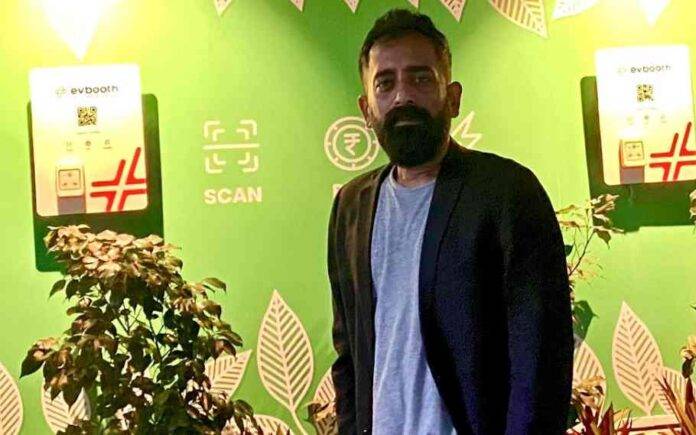 “The Earth is what we all have in common.”

The Evbooth as a concept started in late 2019. The main motive was to provide public charging infrastructure across cities for faster adoption of EVs.

Since 2019 many new Electric vehicle models got launched in India , but drivers were hesitant to abandon their conventional vehicles in favour of electric ones, and one of the most significant reason was lack of charging infrastructure. But as we all know, the most sustainable way to save the earth from harmful gases, is to simply shift into the EV lifestyle, and after a lot of market surveys of what the different sets of customers are looking for, the company finally launched their first photo type in 2020. After a 3-month pilot with E3W (electric 3 wheelers), EVBooth realised that its product not only solved the initial goals set at the start of the Pilot but also was able to validate an increases  in the revenue of the 3-wheeler drivers by 30% to 40%.

But unfortunately, due to the outbreak of COVID-19, the whole process had to pause for a while. In October of last year, EV Booth regrouped and started working on its products with better vision and improved designs and mechanisms. It was in the month of February when they could finally realise their dream and launched Evbooth.

The Husband Wife team of Ravi Bora and Nandini Goswami along with his Brother Dr. Shashi Bora co founded EVBOOTH, with a vision to be India’s Largest Charge Point Provider for electric vehicle. Evbooth’s low cost, future ready chargers are easy to install and can scale to provide a robust network of EV Chargers, which not only provide great ROI( return on investment) for their hosts but also creates an opportunity for thousand of individuals to be “Chargerpreneurs”.

Ravi Bora hails from Lucknow and this is his 3rd company. He started his career as a technology consultant after he completed his engineering in telecommunications. After working in few start ups from 2004 to 2006, he shifted to his family business, which is into petroleum, retail, and hospitality etc. After pursuing his Master’s in the UK, he started his first company but had to shut shop as the market was not mature and made their way back in technology consultancy. After a successful journey with Vow Cabs, and with his Co-Founder, Nandini Goswami, they identified the scope and prospect of EVs in the Indian market.

As one of the co-founders, Nandini Goswami who hails from Guwahati was able to convince the team that the region  provides a great market of prospective customers with better understanding and acceptability of new technologies, and that Guwahati was the perfect fit for Evbooth to launch its services and  Hence, the work started here in April.

Speaking to The North-eastern Chronicle, the founders said, the people they met in Guwahati, were helpful and cooperative and that today they provide their services at over 80 locations in Guwahati, which included various hotels, malls, restaurant, cafes and Public Parkings, with the vision of expanding it to 400 installations in the next few months and about 2000 installations across the Northeast by March,2023.

As per the companies business model for the hosts or as the founders call them ‘Chargerpreneurs’ it is very simple work. They just need to make a small investment in the beginning, and can earn a steady passive income for years. The Company provides 24/7 technical support, as these Chargers are self services and self operated devices. Company is in the process of setting up dedicated EV Booth Charging Zones for  E2W(electric two wheelers) and E3-wheelers, as they constitute 95% of the total EV Market for now, across Assam. And the First Charging Zone will be launched by end of month.

The best way to preserve the ecology of the Northeast is to cut down on the consumption of fossil fuels, and moving toward EVs is a step toward preserving nature. Not only is it a huge push in nature, but it is also a huge push in the economy altogether with super convenient transportation. EV Booth is a sustainable company of the future and of the change that could save the world from deadly pollution.