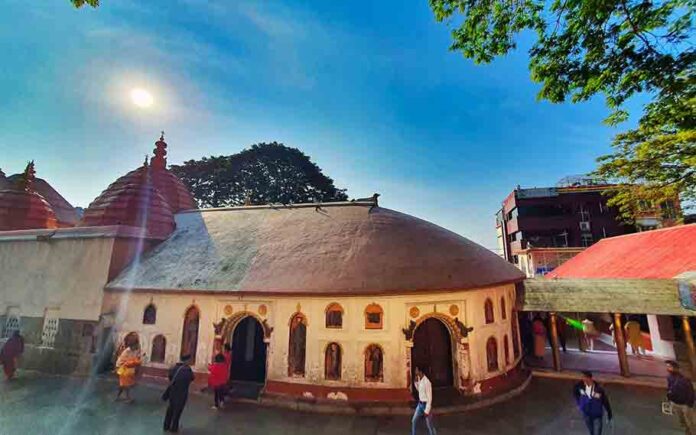 Did you Know? The spot where Sati’s womb dropped is marked by the Kamakhya Temple. It is the oldest of the 51 Shakti Pithas, and thousands of tourists, visitors, and spiritual pilgrims visit each year. It was built to symbolize and honor the deity Kamakhya and is a renowned Hindu pilgrimage site.

Assam is a state with the ability to charm and enchant its tourists with its immense beauty. Assam tourism is one of the major among the seven sisters placed in northeastern India, with the pure Brahmaputra river crossing through the state, Assam tour packages are particularly popular thanks to the state’s abundant environment backed by its amazing history.

The Kamakhya temple, for example, has enticed and attracted travelers from all across the country, and even from other parts of the world. Regardless, every temple or other similar site of worship has the capacity to connect and provide serenity to its visitors. Each one is accompanied by the Kamakhya temple. The narrative behind this particular site of worship will only heighten your admiration for holy rest stops.

This temple, which represents Shakti’s female power and celebrates a woman’s ability to procreate, does not have a Kamakhya statue to worship, but instead a yoni (vagina). ‘Kamakhya Devi,’ is also known as the ‘bleeding goddess,’. It has also been noted that the temple’s ‘Garvagriha’ contains the mythological womb and vagina of the mighty Hindu goddess Shakti.

Interestingly, the Brahmaputra river near the temple turns red every year in June, and legend has it that this is because the goddess menstruates during that time. Perhaps the only temple in India that rejects the traditional idea of condemning a woman in favor of appreciating her potential to conceive a child.

History of the Kamakhya Temple

However, the story of its creation may be traced back to the reign of Gods Shiva and Shakti in ancient India. According to the story, goddess Sati struggled with her husband in order to participate in the major yajna offered by the goddess’s father to please and gratify God. Shakti ignored her husband’s advice and proceeded to the yajna, where her father insulted her.

Things got worse when Sati’s father insulted her husband Shiva, which she couldn’t handle, and decided to step into the yajna’s sacrificial fire. Lord Shiva’s rage knew no boundaries as he held his wife’s burnt body and danced the dance of destruction, or ‘tandava,’ unwillingly and in haste.

Lord Vishnu used his chakra to cut down the body into pieces to calm down the furious and agitated Lord Shiva, who was becoming increasingly enraged. Finally, it is thought that portions of Sati’s body were scattered across the country in 108 separate areas. In current times, these are known as ‘Shakti piths.’

A Kamakhya temple tour allows you to participate in a national celebration of womanhood. It informs every person about the temple’s progressive, step-by-step approach, which it proudly displays.

Also Read: The Legend of the Bleeding Goddess Kamakhya & the ‘Shakti’ of fertility