Did you know some common hand gestures are offensive in other countries? 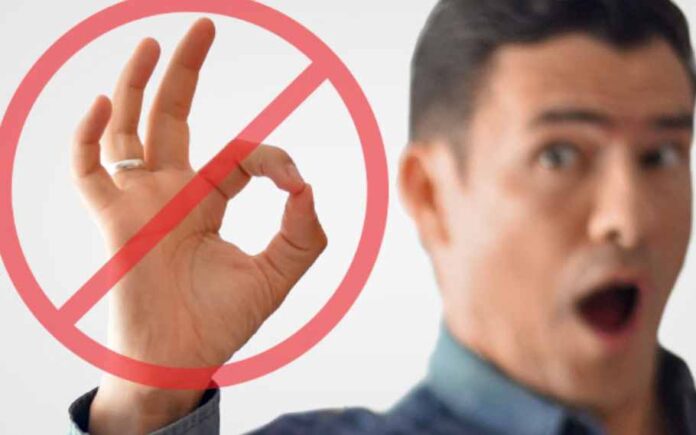 Hand gestures play a vital role while we communicate. These gestures also help us learn and remember things quickly. Besides, it shows how confident a person is during an interaction. These hand movements are spontaneous and are produced in rhythm with our speech and are related to the meaning of what we are saying. For example, when talking about attending a piano recital, you might move your fingers right and left in front of you to illustrate what playing a piano looks like.

Hand gestures that you never know were rude:

There are certain hand gestures which might seem alright to you but may be thought as rude if used in front of people from other countries. Just as slang words, table manners, and other common customs the concept of hand gestures too vary from nation to nation.

Here we present to you some surprising hand motions you shall need to avoid using while communicating with people from other nations:

Thumbs-up in Iran: This might seem a universally positive gesture but in Iran and neighboring countries like Afghanistan, the thumbs-up is equivalent to the middle finger. This was explained by Dana Hooshmand, who is an author for Discover Discomfort, a language- and culture learning resource.

Backward peace sign in the United Kingdom: The second and third finger of hand is generally used as a sign of peace by almost half of the population. However, if you do it in the United Kingdom, in a certain way, you might instead be inciting a skirmish that would mean an episode of irregular or unpremeditated fighting, especially between small or outlying parts of armies or fleets. If your palm is facing away from you, it’s harmless where at the same time backward peace sign is thought as an insult.

There is a theory which suggests that this rule is rooted from a 15th-century battle. War prisoners were said to have had their second and third fingers chopped off so that they’d no longer be able to fire bows. Prisoners who escaped before undergoing this punishment, therefore, would flash those two fingers as they ran away. The gesture’s derisive, taunting connotations, proponents say, remain to this day.

Pointing with index finger in Malaysia: atheist once in your life, your elders might have told you that pointing towards a person is rude. But, while it can be inconsiderate in the United States in certain circumstances, an index-finger point is always rude in Malaysia. As it can be viewed as offensively in some cultures, employees at Disney parks are actually trained to avoid pointing with their index fingers. Instead, if they must point to something, they use two fingers.

Using the left hand in India and many Middle Eastern countries: While in the United States, you’ll find no shortage of lefty pride, southpaws will want to be careful about using their left hand as they normally would should they travel to India or the Middle East. This is because the right and the left hands have specifically designated tasks. The right hand is used for eating, passing any object or picking up items for purchase whereas the left hand is used for unpleasant tasks.

Pointing at the moon in Taiwan: The Taiwanese believe that pointing to the moon won’t offend an Earthbound person but instead will incur the wrath of the moon goddess. Her punishment for this affront is very specific: She’ll cut your ear off, or at the very least maim it Van Gogh–style. So if you’re admiring a beautiful full moon in Taiwan, endeavor to keep your hands by your sides.

The last thing you want to do when traveling to a new country is to offend the locals. While this may seem easy enough to avoid doing, sometimes cultural differences can make even the simplest thing harder. In this article we tried to provide you a slight idea on the same.

Also Read : Did you know instrument strings are made from animals?