ASF breaks out at 1 piggery farm in Manipur 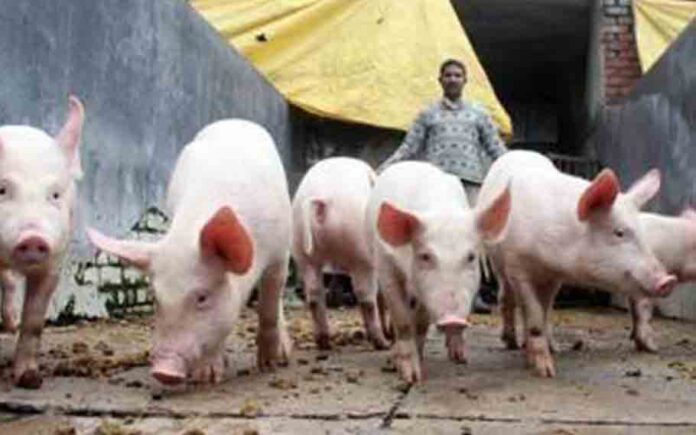 Officials in Manipur’s Kamjong district reported on Thursday that the dangerous African swine fever (ASF) had been identified at a piggery farm.

According to a senior official of the state veterinary and animal husbandry department, the ASF epidemic was verified among pigs in Dang Farming, which is located under Grihang village in Manipur’s Kamjong district, after laboratory test reports from outside the state were received on May 30.

“An inquiry is underway to determine the ASF disease’s source,” the official stated.

Following the report, the deputy commissioner of Kamjong district designated a 1-kilometer “infested zone” near Dang farmland in Grihang village and a 10-kilometer “monitoring zone” around the infected premises.

Further, no live pigs, pig feed, pork, or pork products will be allowed to be taken out of or brought into the zone, according to a DC notification dated June 1.

“No animal or cargo carrier will transport animals into or out of the affected zone.” “No one is authorized to take out any pig, alive or dead, that is afflicted or suspected of being infected with ASF,” according to the DC’s notification.

At the same time, no person, organization, or institution shall host an animal market or exhibition within the zone, nor engage in any activity that involves the grouping or gathering of pigs, it added.

Meanwhile, the district veterinary office has developed Rapid Response Teams made up of officers and personnel to “actively combat any eventuality in connection with the disease’s management, containment, and elimination, and to avoid future spread.”

In a separate development, Dr. Gideon Shadang, the owner of Dang Farming in Grihang village, claimed over the phone that nearly 80 pigs of the Hampshire and Yorkshire breeds, which he obtained from various agencies including the state’s Central Agricultural University, were culled at his farm, which is about 4 km away from the village after his pigs were infected with the disease in the last few days.

The other pigs, consisting of ten local and two non-local varieties, will be culled as well, according to Dr. Gideon, a teacher-turned-entrepreneur.

However. in January of last year, ASF was discovered in Manipur. The infectious sickness had just been detected in the neighboring state of Mizoram.

Japanese Encephalitis Cases rises up to 377 in Assam; 7 dead