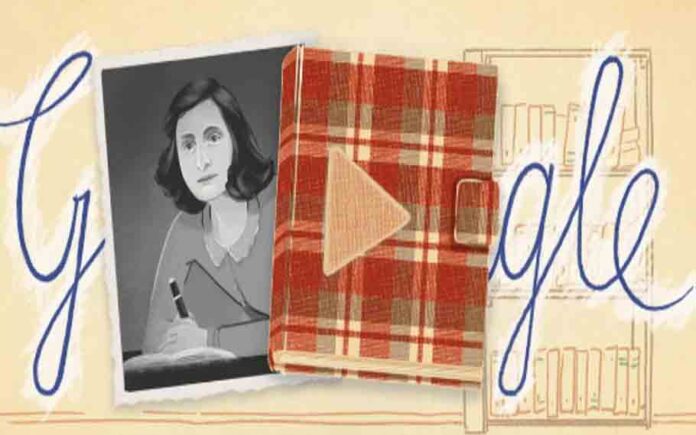 A Google doodle film featuring scenes from Anne Frank’s life from the book was released on Saturday to mark the publication of The Diary of a Young Girl by Anne Frank, which was published 75 years ago.

The doodle also commemorated the Jewish Holocaust victim’s 93rd birthday, which would have occurred earlier this month on June 12.

The drawings were made by Google Doodle art director Thoka Maer. The German illustrator has discussed how preserving the memory of the Holocaust plays a significant role in the illustration process.

Otto and Edith Frank welcomed Anne Frank into the world on June 12, 1929, in Frankfurt, Germany. After Adolf Hitler’s Nazi Party took control of Germany in 1934, her family relocated to Amsterdam in the Netherlands.

The Franks fled to hidden quarters behind a bookshelf in the building where Otto worked in July 1942 as anti-Semitic persecution increased. Anne’s diary refers to this location as the “Annex.” Anne kept a notebook she had been given for her birthday that detailed her family’s existence in hiding up until their arrest by the Gestapo (the Nazi secret police) on August 4, 1944.

The diary is also filled with details of her inner life as a teen, in which she vividly recounts all the everyday struggles that teenagers face. It now serves as a crucial resource for comprehending life under the Nazi Party.

When Otto, the sole survivor of his family during the Holocaust, arrived in Amsterdam, he discovered that his secretary, Miep Gies, had managed to save Anne’s journal. In 1947, he made the decision to publish Anne’s diary in order to grant her biggest ambition to become a writer.

The Diary of a Young Girl, which was originally published in Dutch, was translated and first appeared in English in 1952. It has since been translated into more than 70 different languages.

The diary has grown in popularity over time and continues to act as a source of inspiration for several plays and movies.