Controversial AFSPA killings in Northeast since decades; Is it time to repeal? 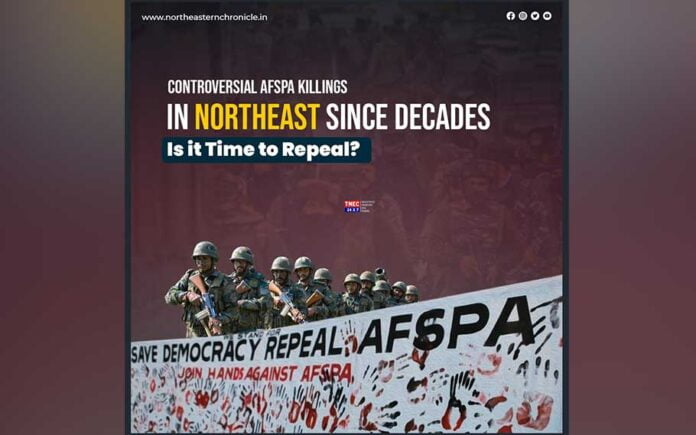 India, a country with 1.3 billion people who coexist together has faced several hardships before and after independence.

During the British Raj, the Indian national army launched several attacks while forming an alliance with the Japanese army in parts of the eastern border of India as part of the Quit India Movement launched by Mahatma Gandhi in 1942.

The Britishers were desperate to stop these attacks and did not want to escalate the matter which would go out of hand and beyond their control that’s when Lord Linlithgow, Viceroy of India declared an emergency all over India and enforced the Armed Force (Special Powers) Ordinance on 15th August 1942 —which gave birth to the controversial AFSPA Act.

After enacting the ordinance, the Britishers gave powers to Armed Forces to act in any manner and apply whatever force —a “license to kill” any Indian from provoking or launching, planning future attacks and stopping the movement in various parts of the country.

The Armed Forces (Special Powers) Act was later renamed after it. It was only found in a few “disturbed sections” of the highlands. However, it was later enlarged to include all seven northeastern states.

It has been in effect for practically all of Manipur since 1980, except for the Imphal Lok Sabha seat. Punjab and Jammu & Kashmir also adopted it. Punjab was the first state to repeal the AFSPA in 2008.

In 1946, the Naga National Council (NNC) was formed under the leadership of Angami Zapu Phizo who declared Nagaland as an Independent country on August 14, 1947.

However, on March 22, 1952, Phizo after declaring Nagaland as an independent state, established “Naga Federal Government” (NFG) and Naga Federal Army (NFA) but it was considered a threat to the government of the Indian Union and to put down the insurrection, the Indian government dispatched the army, and the Armed Forces (Special Powers) Act was enacted in 1958.

As such AFSPA is declared in a “disturbed area” that can be in a region, state or union territory where the Governor of the state, Administrator of Union Territory or the central government gives notification to the Ministry of Home Affairs whenever the law and order are “incapable” of handling the insurgency, it ultimately reduces the civil powers of the state and is handed over to the armed forces under AFSPA Act.

These Armed Forces include air forces, operating on the ground as land forces and other forces of the Central government including (Central Reserve Police Force, Border Security Force and Indo-Tibetan Border Police).

Due to various insurgency cases, it was necessitated by the law order situation in the northeastern states thus armed forces are deployed to counter insurgency or terrorist operations in seven states of North-East India consisting of Assam, Manipur, Meghalaya, Nagaland, Tripura, Arunachal Pradesh and Mizoram.

As such, AFSPA became a necessity in places like Jammu and Kashmir, Nagaland where cross-border terrorism, insurgency activities takes place which can challenge the sovereignty, peace and law of the country

With so much power, it comes with its own sets of challenges as AFSPA has always been associated with Human Rights violations, as in the northeastern state of Manipur, around 1,528 people were killed between 2000 and 2012 when AFSPA was enforced, the locals called it a ” license to kill” people.

On November 02, 2002, ten civilians were shot and killed while waiting at a bus stop in Malom town, which is famously known as the “Malom Massacre”.

Irom Sharmila aka Iron Lady of Manipur staged a protest not to eat, drink, comb her hair and look into the mirror unless AFSPA was revoked from the state.

However, she was arrested by the police and charged with an “attempt to commit suicide”. Till the year 2016, she has been repeatedly released and rearrested for staging such a protest.

However, without the “Armed Forces Special Powers Act” the government or the authority has to ensure to handle and take measures to stop the insurgency issues just the way some states from northeast India such as Meghalaya, Mizoram, Tripura and parts of Arunachal Pradesh have been declared free of insurgency and some experts say that the state police forces can handle disturbances without any additional reinforcements.

This act was imposed keeping in mind the geographical terrain of these regions and to stop influx by Bodos, Nagas or other tribes from neighboring states.

Now the question arises of how the authorities can regulated the unlimited powers give to AFSPA —without initiating any such attacks under “mistaken identity”; such initiatives can be initiating a proper dialogue between the two parties, a peace treaty and signing of memorundums, revising the rules to investigate, arrest an individual without any arrest warrant or to kill on the basis of ‘opinion or suspicion’.

Enforcing strict punishment for those who misuse these “special powers” and providing basic education, development and industrialisation in the remote borders of the country can reduce insurgent activities.