Drug Crackdown & Drug Withdrawal! A direct link in need of a quick check! 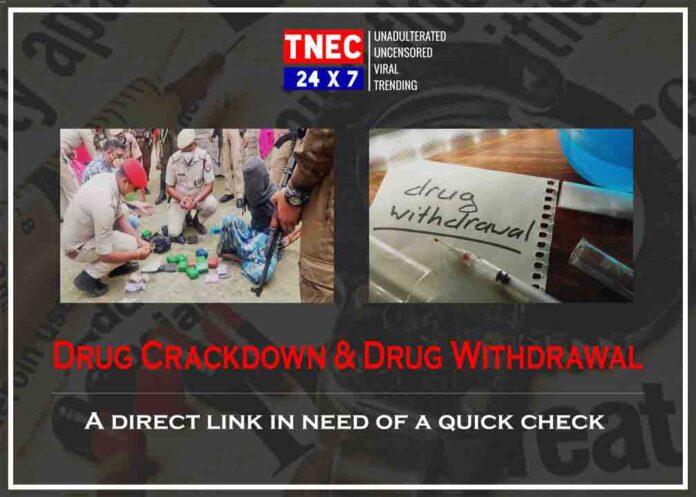 Assam government led by Chief Minister Himanta Biswa Sarma, launched a campaign against the drug cartel in Assam and the border areas bringing about serious changes to the underground drug market in the northeastern state.

The crackdown on drug trafficking — seizure and destruction of huge quantities of narcotics and arrest of many drug dealers — by the Assam government had been going on in full swing throughout the state. Assam busted multiple networks of illegal narcotics and only recently seized around 32 kg of heroin.https://northeasternchronicle.in/news/assam-bangladeshi-nationals-nabs-by-bsf-for-trying-to-cross-the-border-illegally-includes-4-women-and-5-children/

While crackdown of such drug networks does great good for the state, it has its repercussions, which need to be given a check.

Impact of a crackdown

According to a report on the drug crackdown by the ASU Center for Problem-Oriented Policing, the solution of repeated suppression affects the local drug market only for a short time while posing newer problems later if not effectively eradicated.

Motivated drug customers and sellers can adapt to police crackdowns by discovering new means to communicate with one another and negotiate a deal, for example (e.g., via cellular telephones, beepers, steerers). More experienced and highly addicted users are less likely to be deterred by drug crackdowns and are more likely to adapt to them than fresher users.

When dealers are aware of crackdowns, they are less likely to carry drugs on them and are more inclined to store the drugs elsewhere. Drug caches are, of course, vulnerable to theft and police seizures.

However, the ones most affected by it are not the ones dealing with it but the ones injecting/taking it. Users will find themselves in an involuntary drug withdrawal with no availability of supply.

Crackdowns on drugs might also have unintended consequences. As a result of the crackdowns, heroin users may rush intravenous drug use, use dirty needles, use the drug in remote locations where they may not be found if they overdose, hide the drug in body cavities, increase the risk of accidental overdose or infection, and discard used syringes more carelessly.

The risk of violence might arise when buyers and sellers become more apprehensive of one another as a result of a crackdown. If consumers remain extremely motivated to obtain drugs despite a crackdown, and the crackdown raises drug prices, buyers may resort to criminal activity to fund their addiction.

These drug intakers, who might find themselves in voluntary drug withdrawal, might turn violent and resort to other withdrawal symptoms which in voluntary cases are taken care of by trained medical professionals.

Link to recent case in Maligaon

As reported by the North-eastern Chronicle, a son allegedly murdered his mother on Tuesday. The murder was committed in the evening around 6 pm to 7 pm.

The murderer, Dipankar Dey, who allegedly killed his mother Purani Dey Mandal, is claimed to be a drug addict. His mother was giving her evening offerings to God when he hit her with a huge rod. After committing the crime, Dipankar Dey, himself went to the Jalukbari Police Station and surrendered himself for the crime.

Locals have said that he was even mentally disturbed. Dipankar also told police that they would find the body of his mother at home. Police have arrested him and the case is still under investigation.

However, people claiming him to be a drug addict, and his actions could attest to withdrawal symptoms which in certain cases, depending on the extent of use, give way to severe symptoms like agitation, anxiety, depression, hallucinations, delirium, and seizures.

Moreover, Maligaon has its own history with drugs over the years which has resulted in police discovering and arresting drug networks in the area multiple times.

If someone quits taking a substance with a high potential for addiction unexpectedly or abruptly or dramatically reduces their use, they may suffer a variety of withdrawal symptoms. Depending on the type of substance and their biological make-up, the strength and length of these withdrawal symptoms might vary greatly.

Withdrawal can be painful and, in some situations, dangerous. As a result, they should always see their doctor before discontinuing or lowering their substance use.

According to American Addiction Centres, as the user’s drug of choice is removed from the body, it attempts to return to a new state of homeostasis. This can cause major changes in brain chemistry, as well as significant mental and physical health consequences.

Drug withdrawal symptoms can involve a variety of physical, mental, and emotional signs and symptoms, some of which can be deadly if not addressed properly.

In some cases, more severe symptoms such as hallucinations, seizures, and delirium may ensue. The sort of substance one was taking, the length of time they were taking it, and the dosage they were taking can all influence the type and intensity of their symptoms.

What can be done?

Alongside the crackdown on the drug cartel, it is also important to know the users, i.e., the client. With a severe crackdown, it will definitely result in a lack of supply which can give way to violent repercussions. In some cases, even proving to be a different kind of danger to society.

Therein lies the need to rehabilitate those who have been using it, and provide them with the treatment or option of getting treated. It also needs proper vigilance to avoid any violent crime related to drug or drug withdrawal.