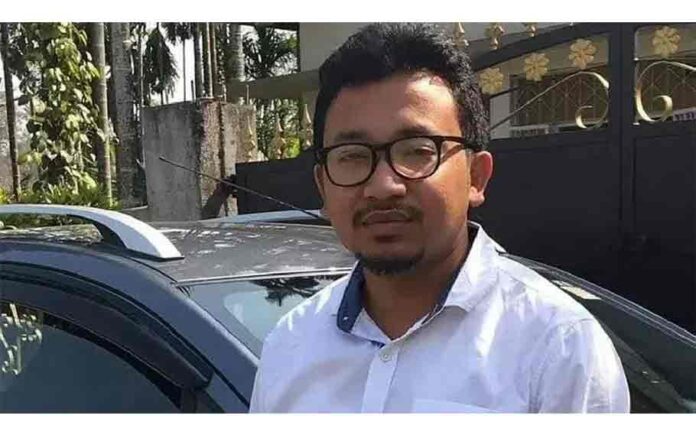 Janardhan Gogoi aged 29, vice-president of the Congress youth wing in Sadiya, Upper Assam, wrote to his wife, Reema, on Facebook that he was “leaving” because he couldn’t tolerate seeing the Assamese community being “systematically destroyed.”

Moreover, Gogoi wrote on Facebook that he intended to “save the Assamese community.”

In addition, he said, “I am well aware of the true nature of Assam’s political parties and organizations—our people are powerless in their own country.” “I can’t sit here and do nothing while our community and culture are being obliterated in this way,” he wrote on Sunday.

Meanwhile, according to Jain, the incident is under investigation, and the police are conducting a background check on Gogoi.

Furthermore, a 30-year-old man from nearby Sivasagar was arrested on Monday in connection with the case. “We’re presently questioning him since he’s suspected of being the linkman,” cops stated.

However, the Youth Congress leader Gogoi’s family was unaware of his former allegiance to ULFA-I, according to the police.

Moreover, Youth Congress leader Gogoi’s social media posts typically show his care for the greater Assamese community, according to a Congress office-bearer who has worked with him.

In addition, he said, “We don’t know why he did it, but it was apparent that he cared deeply about the Assamese jati, his identity, and his community… “He was also a good writer.”

Gogoi, whose parents are both teachers, used to work for the Congress state unit’s social media department.

Moreover, the Congress office-bearer went on to say, “He did excellent work, and the Assam Pradesh Congress Committee honoured him.” He was elected as an office-bearer in 2019,”, adding that Gogoi and his wife had a young boy and were expecting another child.

It was not uncommon for “disillusioned” adolescents, especially those from Tinsukia regions, to gravitate into ULFA-I, according to the Congress office-bearer. “A factor is a lack of employment and rehabilitation,” he stated.

The chief minister has been pleading with the ULFA-I chairman, Paresh Baruah, to refrain from violence and come to the table for talks since last year. The organisation declared a three-month unilateral ceasefire in May and has since extended it thrice.

Himanta Biswa Sarma once remarked that the fact that Paresh Baruah’s nephew has joined the United Liberation Front of Assam (Independent) is not surprising.

Following the Bodo and Karbi accord, the Assam Chief Minister stated that the mindset of armed rebellion has faded in Assam; yet, he expressed alarm about reports of ULFA recruiting campaigns.

“Bodo and Karbi accord has led to the end of mindset among the indigenous people for armed rebellion in one way. We are in talks with ULFA at different levels and even then, the new joiners in ULFA are a cause of concern for us,” said Dr Himanta Biswa Sarma.

Moreover, Sarma stated on April 15 that while attempts were being made to bring the group to the negotiating table, the recruitment of new cadres was a source of concern.

Last month, Congress MP Gaurav Gogoi raised the issue of youth people joining the militant group. “We need to investigate why young people are joining the organisation… “The fundamental cause is unemployment,” he remarked during Zero Hour in Parliament, while also requesting that central intelligence services visit the state to assess the situation.