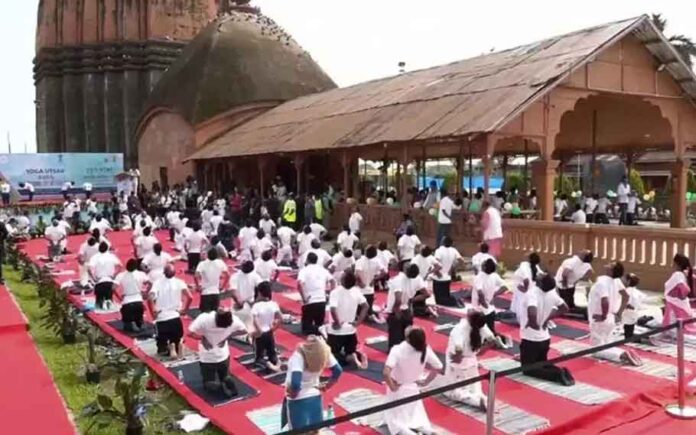 The Ayush ministry, with the cooperation of the Assam government, held a Yoga Utsav in upper Assam’s Sivasagar to commemorate the 50-day countdown to the International Day of Yoga in 2022.

More than 10,000 yoga devotees from all northeastern states attended the event, which was organized by Morarji Desai National Institute of Yoga (MDNIY) under the Ministry of Ayush.

Meanwhile, the Yoga Utsav was held at seven historic locations in India at the same time.

The purpose of the Yoga Utsav was to raise awareness about the various aspects of Yoga and its power to brighten people’s lives.

The theme of Yoga Utsav

The theme of the event was “Make Yoga a Part of Your Life.”

Speaking on the occasion, Union Minister Sonowal said, “Under the dynamic leadership of Prime Minister Narendra Modi Ji, yoga has got the necessary platform which has helped build the brand India image.”

In addition, Sonowal said, “As thousands of people from all the northeastern states came together at this pious land in the beautiful town Sivasagar to perform yoga, it reinforces our sustained effort to put the iconic heritage sites of Assam on the tourism map of the world through this event today.”

“The purpose of the Utsav is to encourage people to practice Yoga, a magnificent gift from our thousands of years of civilization, in order to improve their quality of life,” he explained.

Sivasagar is historically significant because it was the capital of the Ahom kingdom, which governed between the 13th and 19th centuries CE.

The Ministry is promoting the eighth edition of International Day of Yoga (IDY2022) through a variety of programs in order to spread the message of Yoga to a wider audience around the world.

On the 13th of March, a curtain-raiser ceremony was held to commemorate the 100-day countdown to IDY2022, while a 75-day countdown event was held in the Red Fort in Delhi.

In Hyderabad, the 25-day countdown to IDY2022 will be commemorated. Every year on June 21, the International Day of Yoga is observed all around the world.