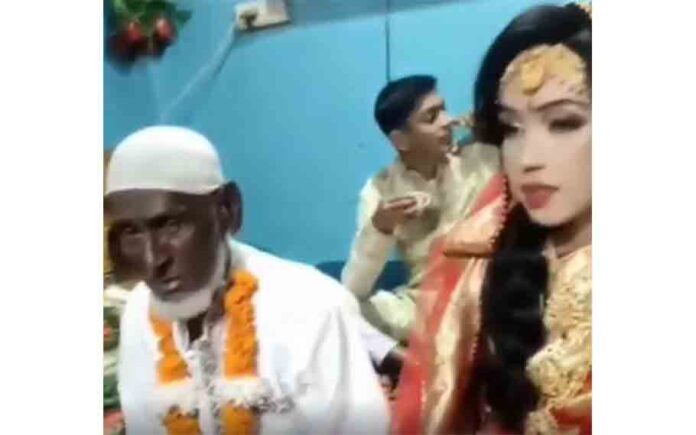 In India, wedding season is in full swing. Hundreds of thousands of couples marry every day during this time. Every day, many wedding films are published on social media. These are videos that have gone viral for one reason or another. Couples are said to be sent from above. A video of such a bride and groom is currently going viral, and you will be startled to see it.

The groom in the wedding appears to be over 60 years old in a video. At the same time, the bride does not appear to be older than 25. Everyone’s senses have been blown by such a large age gap between the bride and groom. Following the release of the footage, social media users are unconvinced that this could happen. An elderly man is seen seated in the groom’s attire in this video. At the same time, the bride is seen next to him, laughing and smiling.

The program of Jaimala has come to an end, as evidenced by the video. The bride and groom are then seen seated on the stage together. The bride and groom, who are sitting nearby, have an age difference of more than 35 years. Everyone refers to the groom as Babaji when they see him. The groom has a fully white beard. The most amusing part of the video is when the videographer points the camera at the bride to record the video. see the video-