Vulture catastrophe in Assam: 100 birds die due to ‘unintentional’ poisoning in Kamrup 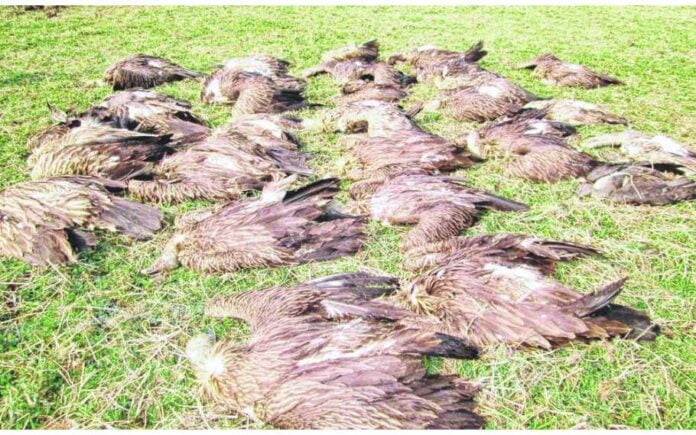 As many as 100 vultures die due to accidental poisoning in Kamrup district of Assam on March 17.

Death of Vultures in Assam:

The death of the vultures took place as a consequence of a poisoned dead carcass. Besides, eleven more members of the ‘near threatened’ vulture species, which also fed on the carcass, are struggling for their lives.

Reacting to the catastrophic incident a local conservationist in Milanpur village said, “Around a hundred Himalayan vultures have died all of a sudden.”

“We were intimated by the residents of the village and arrived on the spot with forest department officials and scientists from Bombay Natural History Society (BNHS) only to find that 97 vultures and a steppe eagle had died. We were able to rescue 10 vultures and a steppe eagle. They are currently undergoing treatment at the BNHS centre,” he added.

Why did it happen:

While speaking to a source Sachin Ranade, senior centre manager at the Vulture Breeding Centre in Rani city of Kamrup district stated, “This is a case of pesticide poisoning due to carbofuran. Sometimes, feral dogs chase cattle and injure them, because of which farmers have to incur losses. They spray the carcasses of cattle with pesticide to kill the dogs. Here, we found two carcasses — one of a goat and one of a dog — that had been sprayed with the pesticide.”

Ranade further said that “This was a case of unintentional poisoning of vultures when they ate the two poisoned carcasses.”

The vulture carcasses were cremated by the BNHS staff to prevent the poison from getting into the food chain.

According to a report by the Bombay Natural History Society (BNHS) there are around 1,500 to 2,000 vultures in Assam. The Himalayan griffon is listed as a migratory species among these and is listed as ‘near threatened’ in the International Union for Conservation of Nature’s Red list. The non-profit Bird life International states that the global population of the vulture has declined sharply over the years.