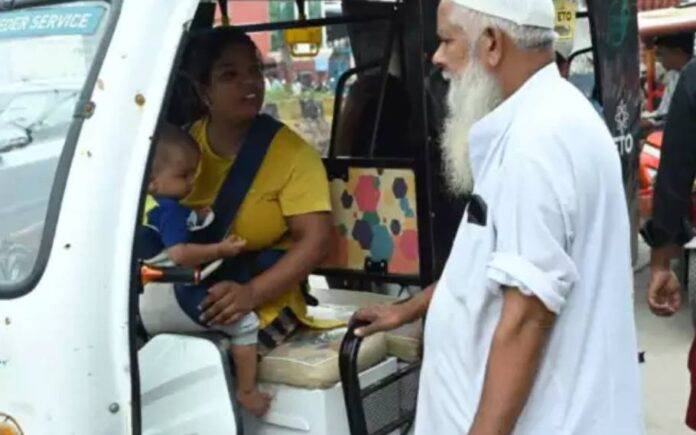 Noida single mother Chanchal Sharma has her one-year-old son strapped to her in a baby carrier as she picks up passengers in her e-rickshaw. Her day starts at 6. 30 am. Notably, her route is a 6. 5km stretch between the National Institute of Biologicals in Sector 62 and Labour Chowk in Sector 59.

Chanchal Sharma said if she had a job, she would have had to leave his one-year-old child somewhere as it was not possible to take him with her to her workplace.

She takes a break at noon to give the kid, named, Ankush a bath and lunch. After spending some time, Chanchal again takes an e-rickshaw on rent and carries the ride till evening.

Chanchal has been an inspiration for many women who live alone by driving an e-rickshaw in Noida, Uttar Pradesh. She is now separated from her husband. Chanchal earns Rs 600 to 700 in a day and pays Rs 300 to the private agency that loans her the battery-operated vehicle.

Chanchal said, “Any work done with honesty and hard work is not considered menial. It is very difficult to leave the child with my sisters, due to which I did not even work anywhere as it was not possible to take the child with me everywhere. For the last two years, I am working as an e-rickshaw driver.”

Also Read:Humans Are Getting Older; Here’s Why