Is hosting Olympic Games really worth it? The dark side of Olympics 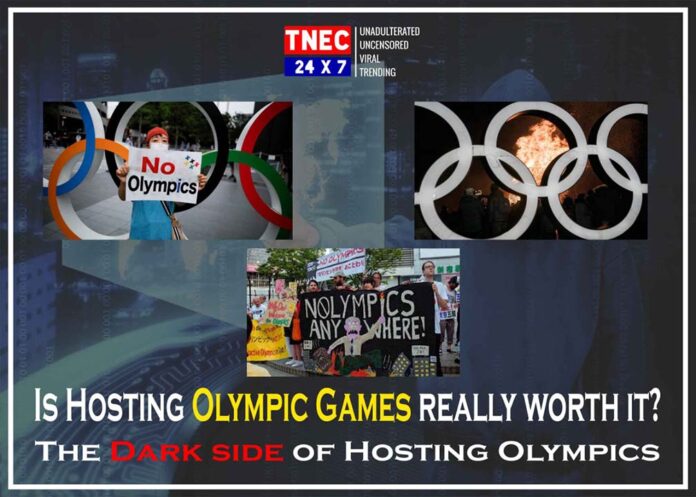 The most extravaganza sporting events, of all time, the Olympics. The centuries old Sporting event where numerous athletes from all over the globe put their blood and sweat to win a medal and put their names etched in History.

After every four years different cities and countries host the Olympic games whether be the Summer Olympics, Winter Olympics or the Paralympics.

The International Olympic Committee and it’s members choose the host country. The host city is elected by a majority of the votes cast by secret ballot. Where each active member has one vote.

And everytime we get excited which country or city to host the next sporting extravaganza. And every country put their best to win a vote in order to get the hosting rights of the Olympics. But is hosting an Olympic Games really worth it? Maybe not, here’s why.

Over Budget and Lack of maintenance afterwards

These days hosting an Olympic requires different venues and an Olympic Village which can cost over 2-3 billion dollars depending on circumstances. In addition with transportation, media centers etc.

Cities used to make profit from the games partly because they collected a lot of revenue from TV rights. But recently the International Olympic Committee has been taking larger percentages.

A newly built mega stadium can cost upto 30 million but cities don’t use it after the games and those facilities fall up to decay it not kept up, and that hurts property value.

Hosting an Olympic games can cause a lot of environmental disruption as lots of trees and hills gets cut, and it has also been reported that lots of animals living there are close to extinction. Just to built stadiums and training facilities etc.

If we take an example of the Winter Olympics held in peyong chang, which destroyed a whole mountain side.

The Tokyo Olympics has often be called as “Cursed” because of the covid pandemic and games also has to be postponed for a year. With Japan having a low vaccination rate , the Olympic held as the city is in a state of emergency and there was no spectators in the stands.

Tourists couldn’t flock into the country, because international spectators were banned months ago. If we go strongly through public opinion, most of them are against the Olympics.

As per poll done by Japanese newspaper Asahi, 83 per cent of respondents were in favour of postponing or cancelling the Games.

In recent years Olympics struggled to attract bidders. Next year’s Winter Olympics in Beijing faced only Almaty, Kazakhstan as their bidding challenge, after Stockholm, Oslo and Krakow, Poland, all dropped out of the running.

For the 2024 Paris Summer Olympics, there were initially five bids but after most cities dropped out, the International Olympic Committee gave the games to the French capital without a challenge and the 2028 Games awarded to Los Angeles in a deal to ensure there would be prestigious host cities for both events.

Brisbane, Australia is expected to host the 2032 Olympics, because it is the only city in the running, leaving the International Olympic Committee little over no choice.

So looking at the current scenario who would want host a game in the first place. Not many as we see after each financial failure fewer cities bid to host. Boston pulled out of the 2024 Summer Olympics after its citizens started protesting “No Boston Olympics”

It requires decades of planning just to be in the running host. Is this a death of Olympic? Maybe not in 2014 IOC suggested a list of 40 actions to shape the future of Olympics.

Though whatever be the reason, Olympics still remains the most eye catching sporting events where we see pioneers athelete give their best of their performances.