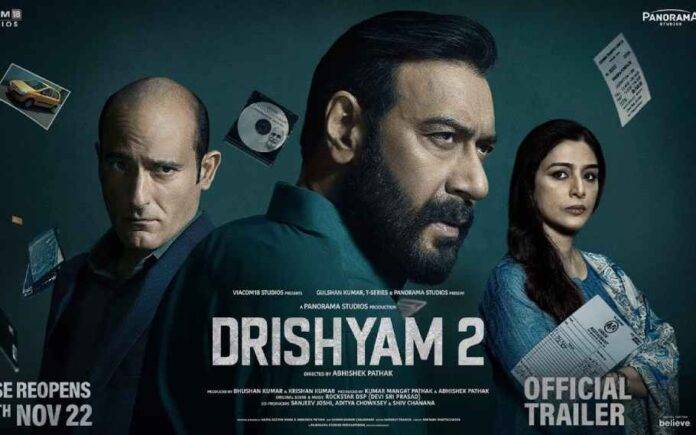 Drishyam 2 features Ajay Devgn, Tabu, Shriya Saran and Akshaye Khanna in lead roles with Ishita Dutta, Mrunal Jadhav and Rajat Kapoor in supporting roles. Directed by Abhishek Pathak, the film was certified U/A by the central board of film certification (CBFC) with an approved run-time of 2 hours 33 minutes.

The film has sold 1.2 lakh tickets nationwide in the top three chains. This is the highest for any Hindi movie this year, behind Brahmastra. Moreover, the film pre-sold over 55,000 tickets at PVR, around 50,000 at INOX and around 22,000 tickets at Cinepolis.

The advance sales are ahead of other major Hindi films including Bhool Bhulaiyaa 2, Laal Singh Chaddha, Vikram Vedha, JugJugg Jeeyo, and Shamshera.

The first Drishyam was a major box office hit. Drishyam 2 succeeding at the box office would be a much-needed win for Ajay Devgn, who has had a series of disappointing releases in the last couple of years.

However, three movies in which he played supporting roles, Sooryavanshi, Gangubai Kathiawadi, and RRR, all did well. The film was released in theatres on November 18.

Also Read:AJAY DEVGN STARRER DRISHYAM 2 TEASER TO BE OUT TOMORROW!