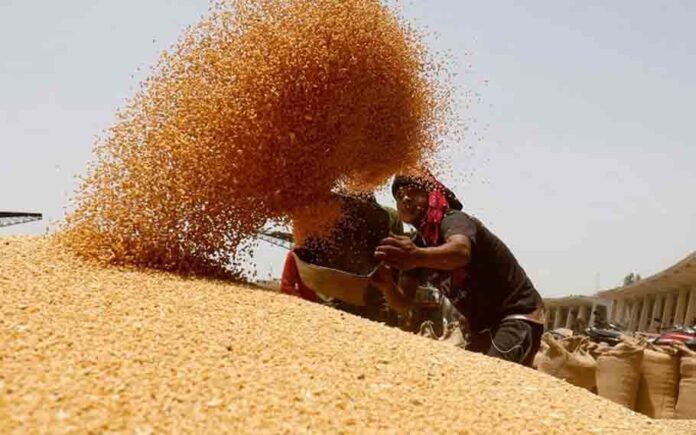 Wheat exports are restricted in India. When global markets reopened on Monday, international prices had risen nearly 6% per bushel (60 pounds or one million kernels or 27.21 kg).

Moreover, worldwide wheat prices soared over 60% in 2022 due to Russia’s invasion of Ukraine on February 24 and the resulting supply disruption; Russia and Ukraine combined account for about a third of global wheat exports.

However, on Monday, corn futures in Chicago climbed 5.9% to $12.47 per bushel, the highest level in two months. The previous trading session’s closing price on May 13 — the day India issued the embargo — was $11.77 per bushel.

During that time, total world wheat exports were estimated to be 201.5 million metric tonnes.

The Indian government believes that roughly 45 lakh metric tonnes of wheat have been contracted for export in the current fiscal year, which runs from April 2022 to March 2023.

India’s decision was also met with dissatisfaction by the Group of Seven (G-7) countries. German Agriculture Minister Cem Ozdemir claimed the export limitation would “worsen the crisis” after a meeting of G-7 agriculture ministers in Germany. “It will deepen the problem if everyone starts imposing export limits or closing markets,” Ozdemir said during a press conference in Stuttgart on Saturday.

The decision was defended by India. During a media briefing on Saturday, Union Food Secretary Sudhanshu Pandey claimed the restriction was “basically due to the price increase.”

In the calendar year 2022, retail inflation has been above 6% for four months in a row, with the April reading reaching 7.79 percent, much beyond the upper band of the RBI’s inflation goal of 6%.

The impact of India’s export prohibition, according to research specialists, will be felt disproportionately by low-income developing countries. Except for India and Australia, most Asian economies rely on imported wheat for domestic consumption and are vulnerable to rising wheat prices globally, according to Nomura Global Markets Research, even if they do not directly import from India.

Nomura also stated that the impact on domestic food inflation in India will be minimal.

“If India’s wheat embargo results in higher prices for replacements like rice, other food prices could rise,” the report warned.

The ban serves three purposes, according to Commerce Secretary BVR Subrahmanyam: i) maintaining the country’s food security, ii) assisting those in need; if countries make specific requests, the Indian government will respond, and iii) maintaining India’s reliability as a supplier by not breaching any existing contracts.

“So, if we say that around 1.6 or 1.7 million tonnes have gone out, we’re still willing to let another 2.5 million (tonnes) go if there are prior book valid orders with a letter of credit,” he said on a Saturday media briefing.