Treaty of Yandabo: Emergence of British annexation in Assam 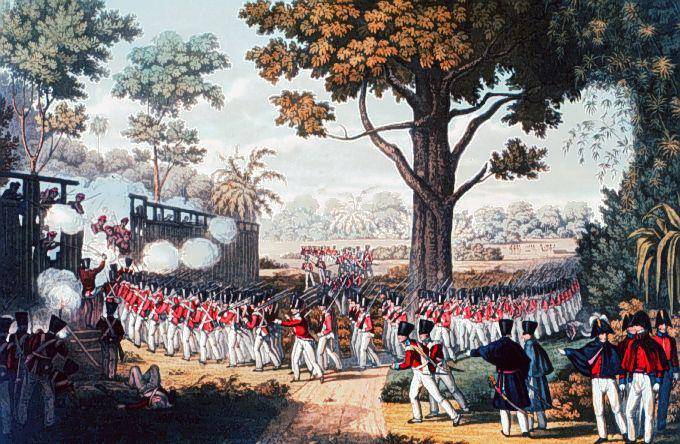 Treaty of Yandabo: We are all apprised by the fact that besides the Ahom dynasty, the land of Assam has formerly been governed by several tribal communities amidst the 13th and 19 century in the historical forefront. However, the annexation of Assam by the British drastically bound her fate with that of the other regions of the East India Company’s domains in the country. The British occupation of Assam brought a revolutionary change to the economy of Assam.

The Treaty of Yandabo was a treaty of peace which was signed in the year 1826, at the end of the first Anglo-Burmese War and gradually marked the beginning of British Colonial penetration into Northeast India.

The first Anglo-Burmese war was a collision amid the two dilated empires and was the first of three wars fought between the British and Burmese empires in the 19th century. The war primarily began under the control of Northeast India but later ended resulting in the decisive British victory, giving the British total control of Assam, Manipur, Cachar and Jaintia as well as Arakan Province and Tenasserim. Hereafter, the Burmese agreed to the demand made by the British of paying an indemnity of one million pounds sterling, and signed a commercial treaty.

Under the terms of the Yandabo treaty, the king of Burma renounced his claim on Assam and the contiguous petty states of Cachar and Jayantia. The withdrawal of the Burmese provided the British with the opportunity to create spheres of influence in the region. In the decade before the war, the defence of the Bengal regarding the Northeastern Frontier threatened its security and consequently, became critical to ensure that the region did not relapse into further anarchy. The recognition of a renewed Burmese invasion came larger in view and therefore, despite the early pledge by the British to return, once law and order restore in the state, they decided to stay on.

The signing of the Treaty of Yandabo ended the longest and most expensive war to be fought in the history of British India that ensured the death of fifteen thousand European and Indian soldiers died, together with an unknown number of Burmese.

The treaty of Yandabo inflicted a grievous financial burden on the Burmese kingdom and almost paralyzed it in a certain way. The British terms in the negotiations were strongly influenced by the heavy cost in lives and money which the war had entailed. Some 40,000 British and Indians troops had been involved of whom 15,000 had been killed. The cost to British India’s finances had been almost ruinous, amounting to approximately 13 million pounds sterling. The cost of war contributed to a severe economic crisis in India, which by 1833 had bankrupted the Bengal agency houses and cost the British East India Company its remaining privileges, including the monopoly of trade to China.

The treaty of Yandabo was a complete humiliation to the Burmese and an enduring financial burden, whereas for the British it was a moment of utmost pride and valour as territories like Assam became a part of British India.

The treaty of Yandabo initially succeeded in serving its objectives by deeply hampering the Burmese empire. This marked the beginning of the British rule in Assam after which various kinds of surveys and explorations conducted by the British which consequently, revealed the enormous economic potential of the region. It was hoped that Assam would not only serve as a forwarding agency but also as a rich hinterland of Bengal as well.

The British became the controller of Assam and the masters of Brahmaputra Valley and began to impose their rules. All these crossed a century now but in some way or the other, the impact of the treaty of Yandabo can still be felt by the entire region.