Tower of Silence; an unique funeral rituals of Parsis 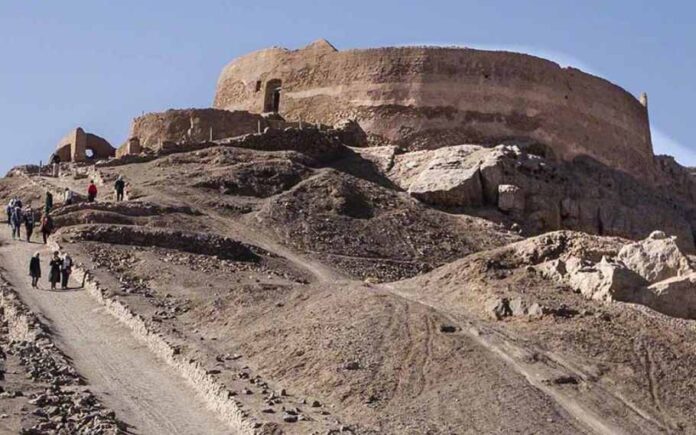 Tower of Silence; A circular and raised structure was built by Zoroastrians for excarnation (that is, the exposure of human corpses to the elements for decomposition), to avoid contamination of the soil and other natural elements by the dead bodies and it is called Carrion birds, usually vultures and other scavengers, consume the flesh.

Tower of Silence or Dakhma

That structure is known as a dakhma or as a Tower of Silence. All the skeletal remains are gathered into a central pit where the rest of the weathering and continued breakdown occurs.

Zoroastrian exposure of the dead is first attested in the mid-5th century BCE Histories of Herodotus. Although the use of towers was first documented in the early 9th century CE. The doctrinal rationale for exposure is to avert contact with the earth, water, or fire, all three of which are considered spiritual in the Zoroastrian religion.

One of the earliest literary descriptions of such a building is mentioned in the late 9th-century Epistles of Manushchihr, where the technical term is today, ‘ossuary’. Another term that appears in the 9th- to 10th-century texts of Zoroastrian tradition (the so-called “Pahlavi books”) is damaged in its earliest usage, it implied any place for the dead.

While writing on the culture of the Persians, Herodotus reveals the Persian burial customs performed by the magi, which are kept secret. However, he writes that he knows they expose the body of the male dead man to dogs and birds of prey, then they cover the corpse in wax, and then it is buried. The Achaemenid custom is recorded for the dead in the regions of Bactria, Sogdia, and Hyrcania, but not in Western Iran.

The Byzantine historian Agathias has described the Zoroastrian burial of the Sasanian general Mihr-Mihroe: “the attendants of Mermeroes took up his body and removed it to a place outside the city and laid it there as it was, alone and uncovered according to their traditional custom, as refuse for dogs and horrible carrion”.

Tower of Silence were first documented in the early 9th century CE, they were much later invented. The funerary ritual customs surrounding that practise appear to date to the Sassanid era (3rd–7th CE). They are known in detail from the supplement to the Shayest one Shayest, the two Rivayat collections, and the two Saddars.

Modern-day tower of silence, which are relatively uniform in their structure, have an almost flat roof, with the perimeter being narrowly higher than the centre. The roof is divided into three concentric rings: the bodies of men are arranged around the outer ring, women in the second ring, and children in the innermost ring. The ritual territory can only be entered only by a special class of pallbearers, called nusessalars, from the Avestan: nasa a salar, consisting of the word elements, -salar (‘caretaker’) and nasa- (‘pollutants’).

Once the bones have been bleached by the wind and the sun, which can take as long as a year. After they are bleached they are collected in an ossuary pit at the centre of the tower, where they are assisted by lime. They gradually disintegrate in the process and the remaining material, along with rainwater run-off, seeps through multiple coal and sand filters before being eventually washed out to sea.

The tower of silence were built atop hills or low mountains in locations distant from population centres, in the Iranian Zoroastrian tradition. In the early 20th century, Iranian Zoroastrians gradually discontinued their use and began to favour burial or cremation.