RBI likely to use images of Rabindranath Tagore, APJ Abdul Kalam On Banknotes, 2022 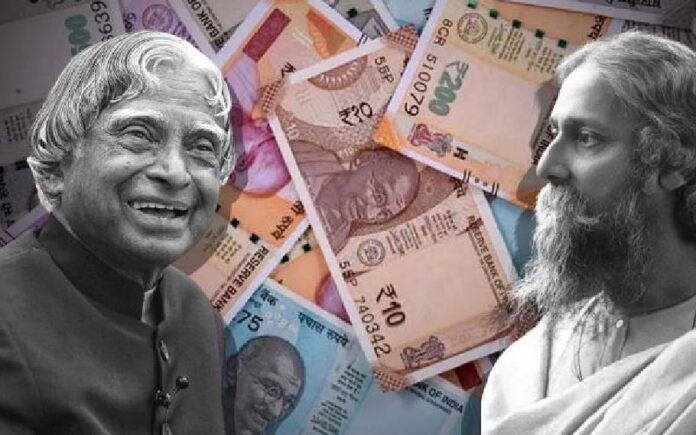 The new notes could feature photos of people never previously seen on Indian currency. So far, the Indian notes have featured the image of Mahatma Gandhi, the Father of the Nation; however, if stories are to be believed, that could alter shortly.

RBI to use new series of watermark figures in Banknotes

The Finance Ministry and the Reserve Bank of India (RBI) are apparently considering placing Rabindranath Tagore and APJ Abdul Kalam’s watermark figures on a new series of banknotes of various denominations.

Along with M K Gandhi, Rabindranath Tagore, one of Bengal’s biggest symbols, and India’s 11th President, APJ Abdul Kalam, better known as the Missile Man, are rumored to be in the running to appear on the country’s banknotes.

However, the plan is in the works to investigate the possibility of adding several figure watermarks on currency notes.

Different denominations of dollars, similar to those used in the United States, feature pictures of some of the Founding Fathers, including George Washington, Benjamin Franklin, Thomas Jefferson, Andrew Jackson, Alexander Hamilton, and a few 19th-century presidents, including Abraham Lincoln.

The Reserve Bank of India (RBI) and the Finance Ministry’s Security Printing and Minting Corporation of India (SPMCIL) are said to have submitted two independent sets of Gandhi, Tagore, and Kalam watermark samples to IIT-Delhi Emeritus Professor Dilip T Shahani.

According to sources, one of nine RBI internal committees formed in 2017 to recommend new security features for a new series of banknotes submitted its report in 2020, proposing that, in addition to Gandhi, watermark figures of Tagore and Kalam be developed for inclusion in all currency notes, with the exception of the Rs 2,000 note, whose printing had already stopped.

Following that, the RBI and the SPMCIL sent their samples to Shahani to be examined. Shahani has met with officials multiple times to review the “finer points” of the samples.