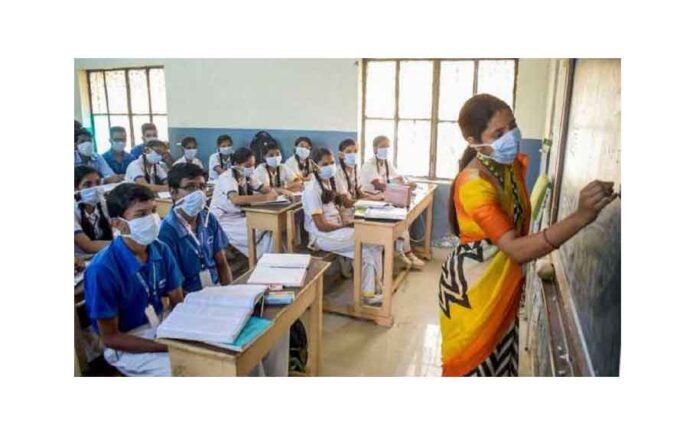 Karnataka: With the Gujarat government planning to introduce Bhagwad Gita in the school syllabus, Karnataka Primary and Secondary Education Minister B C Nagesh on Friday said the Karnataka government will discuss with educationists before taking a call on doing so.

We will take a call only after discussing with Chief Minister Basavaraj Bommai regarding introducing ‘moral science’,” Nagesh told reporters here.

Claiming that the cultural values among children were taking a beating, the minister said many people have demanded that moral science should be introduced in the schools of Karnataka.

According to him, earlier there used to be one class of moral science every week where contents related to Ramayana and Mahabharata were taught.

“We will seek the Chief Minister’s advice regarding introducing moral science in the coming days.

If we decide to go ahead then we will discuss with the education experts about the content of the moral science and the duration of the class,” Nagesh said.

Even Mahatma Gandhi used to give credit to the Hindu epics-Ramayana and Mahabharata- for his upbringing, which his mother used to narrate to him. When he grew up, the play Raja Harishchandra had a big impact on his life, the minister explained.

Underlining the moral values in Hindu religious scriptures, he said the teachings in these books were the reason behind building a well-cultured society in ancient India when there were no modern schools and universities.

It is our duty to introduce those things, which have positive effect on society. However, it will be left to the educationists to decide what should be introduced, Nagesh said.

“It is not like Bhagwad Gita should not be taught to the children because S M Krishna used to tell me when he was the Chief Minister that he used to read Bhagwad Gita every night, which was his strength,” the minister said.

Regarding the content, he said it will be left to the experts to decide.

“Whatever the experts say about introducing Bhagwad Gita, Ramayana, Mahabharat, or the stories of Jesus Christ and the good teachings in Bible and Quran can be retained. Whatever is time tested, will be taught in moral science,” the minister explained.

The Congress state president D K Shivakumar said there was no need to further glorify things, which are already in the textbooks.

“There is nothing wrong in getting to know about the religious practices of various faiths. We will see what content they (BJP government) want to introduce in the education system.

Textbooks have the contents of various religions. I don’t think there is no need to further glorify new things,” Shivakumar told reporters.

He underlined that the BJP was not introducing a novel idea.

These people (BJP government in Karnataka) are not doing anything new. There is no need for them to take credit for it,” Shivakumar said.

Further, the Congress Karnataka president said he completely opposed the new National Education Policy, saying that the policy was not needed.

“There is no need for the NEP in the state and the country. People are already learned and knowledgeable. There are no circumstances to change the policy,” Shivakumar said.