General Bipin Rawat: The first Chief of Defence staff(CDS) of India is no more 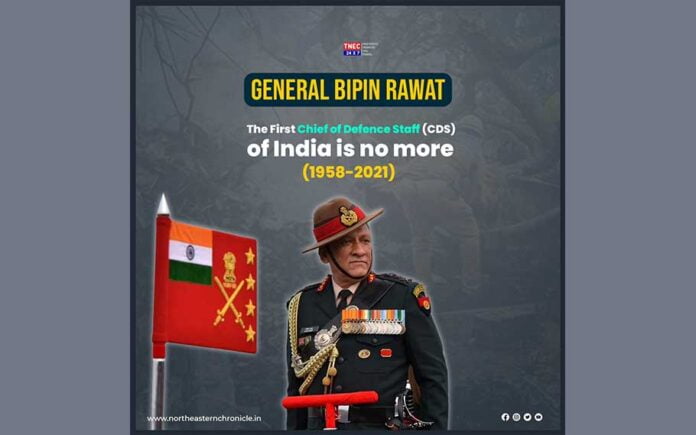 Bipin Rawat, the Chief of Defence Staff, was born in March 1958. Rawat, an alumnus of the National Defence Academy and the Indian Military Academy, was commissioned into the Indian army’s Fifth Battalion and Eleventh Gorkha Rifles in December 1978. General Bipin Rawat was appointed as the first Chief of Army Staff in December 2016.

Bipin Rawat was born in the Uttarakhand town of Pauri. He was born into a Hindu Garhwali Rajput family that has a long history of service in the Indian Army.

While serving in the Indian Army, his father, Laxman Singh Rawat, attained to the rank of Lieutenant General. Kishan Singh Parmar, an ex-MLA from Uttarkashi, was his mother’s father.

Bipin Rawat studied in Cambrian Hill School in Dehradun and St. Edward’s School in Shimla for his education.

He then went on to the National Defence Academy in Khadakwasla and the Indian Military Academy in Dehradun, where he received the ‘Sword of Honour.’

He holds an MPhil in Defence Studies from the University of Madras, as well as certificates in Management and Computer Studies.

For his research in military-media strategic studies, he received a Doctorate of Philosophy from Chaudhary Charan Singh University in Meerut.

On December 16, 1978, Rawat was accepted into the 5th battalion of the 11 Gorkha Rifles, the same unit in which his father served. He led a company at Uri, Jammu and Kashmir, as a major.

He commanded the 5th battalion of the 11 Gorkha Rifles in the Eastern sector of the Kibithu Line of Actual Control as a Colonel. He led the Rashtriya Rifles’ 5 Sector in Sopore as a Brigadier. He later led a multinational Brigade in a Chapter VII Mission In The Democratic Republic of the Congo (MONUSCO), earning the Force Commander’s Commendation twice.

He commanded III Corps, located in Dimapur, as a Lieutenant General before taking command of the Southern Army in Pune.

He is credited with helping to bring militancy in Northeast India to a halt. He conducted the 2015 cross-border incursion into Myanmar, during which the Indian Army effectively retaliated to an ambush by NSCN-K insurgents.

He was also involved in the planning for the 2016 surgical strikes in Pakistan-occupied Kashmir, in which the Indian Army crossed the Line of Control. General Rawat was reportedly keeping an eye on the situation from New Delhi’s South Block.

Rawat became the General Officer Commanding-in-Chief (GOC-in-C) of Southern Command on January 1, 2016, after being appointed to the Army Commander grade. On September 1, 2016, he took over as Vice Chief of Army Staff after a short time.

After Field Marshal Sam Manekshaw and General Dalbir Singh Suhag, he is the third Gorkha Brigade officer to become Chief of the Army Staff.

On December 31, 2019, General Bipin Rawat was sworn in as the first-ever Chief of Defence Staff of India.

Bipin Rawat, the Chief of Defence Staff, died at the age of 63 when a chopper crash in Tamil Nadu’s Nilgiri Hills killed 13 persons, including General Rawat’s wife, Dr Madhulika Rawat. On board the Air Force’s Mi-17V5 helicopter were four crew members and ten passengers, including the CDS.

The helicopter crashed immediately after taking off from an Air Force facility in Sulur, near Coimbatore, Tamil Nadu. It was on its way to Wellington, a Defence Services Staff College in Udhagamandalam, commonly known as Ooty.

On this day, December 8, 2021 we pay tribute to our first Chief of Defence Staff whom we lost in the helicopter crash along with his wife and eleven others. The country mourns their death.