How well do you know about Chhath Puja? Know all the rituals and significance of the festival 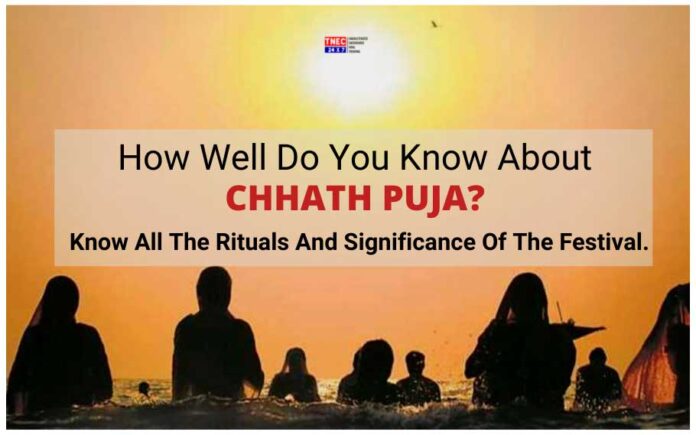 The Chhath Puja is an annual four-day festival celebrated six days after Diwali or on the sixth day of the Kartik month as per the Hindu calendar, which begins this year on November 8 and ends on November 11.

The festival is unique to the states of Bihar, Jharkhand, and Eastern Uttar Pradesh. Devotees observe a nirjala vrat (fasting without water) during this festival and offer Arghya to Chhathi Maiya and Surya Devta.

It is believed that during Chhath, deities fulfill all the wishes of the devotees.

The states which religiously observe the rituals, are Bihar, Jharkhand and Uttar Pradesh, and also Madhesh, the southern region of Nepal, and Assam observe a day-long celebration.

What is being done on the last day of the festival?

Today, on the fourth and the last day of Chhat Puja, women go into the river or pond and offer arghya to Lord Surya.

After that, they circle seven or 11 times. Later the fast is concluded by distributing prasad among each other.

What rituals are to be performed?

The ritual of Sandhya Arghya is also performed on this day, also known as Kartik Shashthi. People worship the Sun God and offer Arghya in the evening. Offering Arghya to the setting sun is the main ritual of the day.

It is the only time of the year when Arghya is given to the setting sun. On the third day, fasting continues throughout the night. Parana is done on the next day after sunrise.

At the time of the ritual of Arghya, people place fruits, soups, and a lit lamp in a bamboo basket and offer them to the setting sun. Bamboo baskets hold a special significance in this festival.

What does history say?

Chhath is mentioned in both Ramayana and Mahabharata, two of the most important Hindu epics.

In Ramayana, Goddess Sita performed the puja on the day Ram-Rajya (the kingdom of Lord Ram) was established, and in Mahabharata, it was performed by Pandava-mother Kunti after they escaped from Lakshagrih, the palace made of lacquer, which was burnt to the ground.

Chhath Puja holds utmost importance in Hindu mythology and is believed that following this puja with great dedication can help in removing obstacles, bring prosperity and thus bring happiness to the family.

The first day of the festival is known as Nahay Khay. People take a holy dip in a water body. Women, who do the puja, have only a single meal. The second day is known as Kharna. On this day, people fast without water from sunrise to sunset.

The fast is broken after sunset. Fast without water, is observed on the third day, which is the main day of Chhath Puja. Offering arghya to the setting sun is the main ritual and fasting continues throughout the night.

On the fourth and final day, arghya is given to the rising sun, and it is called Usha Arghya. Chhath Puja is also known as Pratihar, Dala Chhath, Chhathi, and Surya Shashthi.

Also Read: WHAT IS THE POSSIBLE SOLUTION TO SAVE THE PLANET FROM ‘CLIMATE CHANGE’?