Beef Consumption: why has it turned into a negative sentiment in India in recent times? 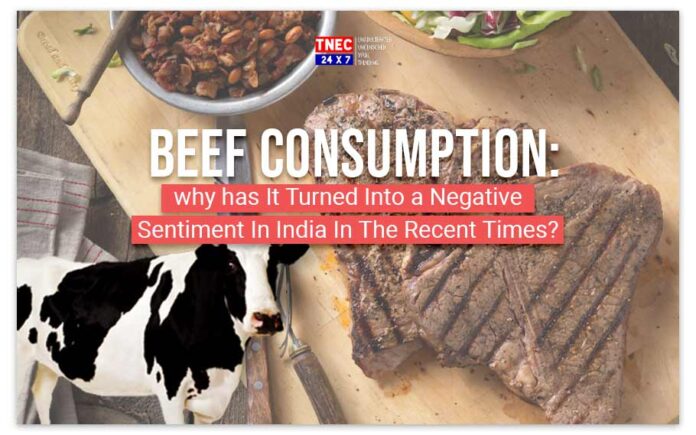 By: Drishika Deka, The North-Eastern Chronicle

Whenever we discuss about the topics- beef consumption or slaughter of cows, it often gets converted into a hot as well as a very controversial topic of debate, as it involves the various paradigm of religion and several other aspects.

Presently, various amount of measures are being taken by many organizations for the protection of cows. However, the most important thing is to know, whether or not the consumption of beef was included in the food habits of the ancient as well as the Vedic people? If yes, then what led to the change in the negative stereotypes or the negative view in the present times regarding the consumption of beef? Well, let us discuss a bit more about this controversial topic.

The Past Scenario Regarding Beef Consumption

In the past i.e. in the ancient times, consumption of beef was practiced widely as the cow was not regarded to be a sacred animal and its slaughtering was also allowed to a certain extent. As the Indo-Aryans migrated to India, they brought certain Indo-European life traits with them including the practice of animal sacrifice.

The sacrifices were made for the respective gods and goddesses like Soma, Agni, etc. The sacrifices of animals met both dietary as well as sacrificial needs in the past. In the various ancient as well as Vedic texts, certain evidence has been present regarding the practice of consumption of beef.

Cattles were also killed in ordinary domestic rites and rituals. Even in a passage of a particular ancient Vedic text, it refers to the slaughter of cow on the occasion of marriage. Also during the reception of important guests, cows were slaughtered. Slaughtering of cattle was also connected with the cults of the dead. During certain special occasions, like welcoming of special guests or during rituals, the female species of the cow was mostly preferred.

Although some of the ancient texts were seen supporting the consumption of cows, while the others opposed it. Although we find various traces of beef consumption through certain ancient texts, but we also know regarding the present religious stereotype, when the cow is worshipped for its purity and innocence in some religions.

The Idea of Protecting Cows, Dawning Upon the Mind of the People

Since the post-Mauryan period, the consumption of beef decreased to a certain extent. This change could be seen in terms of both economic as well as religious developments. In the present description of most of the Vedic texts, cow is provided a sacred place and its consumption is also not accepted according to some religions including the Hindu religion.

However, during the medieval period there arose certain cow-related tensions too, which led to the decrease in the consumption of cow meat among some people. With the rise of the Maratha kingdom and Shivaji, who was regarded as the protector of cows, the practice of protecting cows became more emotive.

And as time passed by, the practice of protecting cows became a major aim for the majority due to it being associated with God Krishna in Hinduism as well as due to certain other aspects. Cattle became respected as an integral or main part of rural livelihoods.

The Present Scenario Regarding Slaughter Of Cows

In the present times, slaughter of cows, has been restricted by the various Indian religions on account of peacefulness (Ahimsa). Even according to the Article 48 of Indian constitution, it prohibits the slaughter of cows and calves and other cattles. The cow is regarded as the symbol of purity and docility (symbolized by the cow who provides her milk to her calf).

However many religious conflicts are seen occurring in the present times regarding the differences in the attitude of people belonging to different religions regarding the topic of providing protection of cows and the various measures undertaken to bring this into action.

By the 19th century, many cow protection movements arose. The people started worshipping the cow and its purity began to be considered. The taboo against eating beef became a central tenet of Hinduism during that time. In the present, various fundamental movements have been launched for taking certain measures for the protection of cows. However, this has led to the increase in various religious conflicts among people.

In the present context, we can see that some powers with vested interests are trying to create the topic regarding beef consumption as a negative sentiment. But we must understand that in a democratic country, restricting food habits is fundamentally wrong.

As every community has their own food habits and practices and restrictions put on them can harm the sentiments of the people to a certain extent. We can even notice that the propaganda against beef consumption has been directed towards some minority communities too.

In return it has led to a violent situation among various communities and has taken the shape enough to hurt national integrity and harmony.

Also Read: 3D Printing Beef in Lab: What if you can actually eat beef without killing a cow?