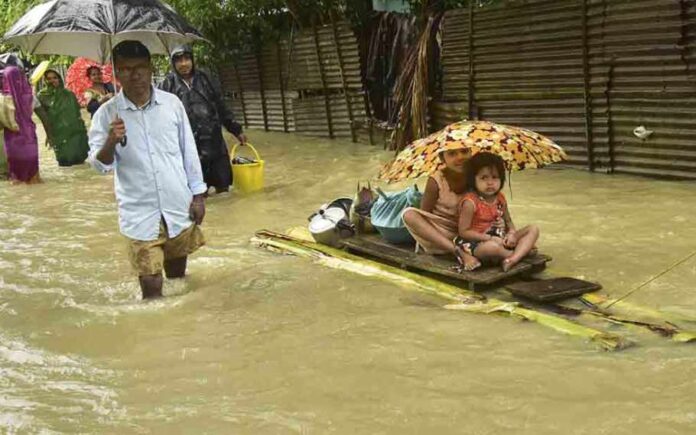 The situation of the state due Assam Floods has been deteriorating to a certain extent as it has affected more than 70,000 people at large.

The rising level of river water in the state is causing quite a worrisome situation in the present context of Assam Floods. The ongoing Assam floods has already created panic among people. In addition, NEEPCO’s Kopili Hydro Electric Project has released the water, resulting in a higher water level. This ultimately will affect the low-lying areas of the state.

Few of the images on social media show quite a terrifying situation of water released by the dam. Further, the level of the water has been rising constantly due to the current weather condition.

The Brahmaputra River water level is currently flowing above the danger level due to the incessant rainfall over the past few days.

Meanwhile, Minister Ashok Singhal on Friday inspected the water pumps and the sluice gate of Bharalu River so as to ensure smooth functioning.

Similar situation has also been witnessed in some of the other parts of Assam wherein the flood water of the Borolia river washed away a portion of land at Choumukha and low-lying areas of Hajo have also been submerged.

Bhabesh Kalita who is the President of Assam Pradesh BJP and an MLA of the Rangia Assembly constituency said, “Following incessant rain, the flood situation has deteriorated and the flood waters have damaged many embankments. A large part of the Rangia sub-division has been inundated by the flood waters and many families have become homeless. Two relief camps have been set up in the Rangia town area.” Visuals also show areas of Pathsala, Bajali district of Assam submerged in flood water.