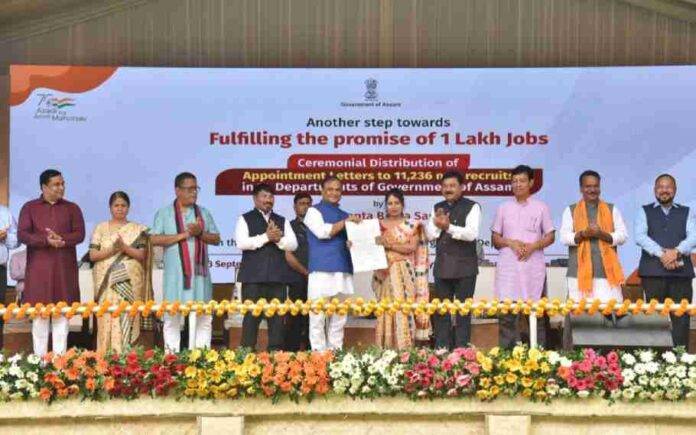 Earlier, the Assam CM appointed 27,737 in the government departments. Sharing a post on Twitter, the Chief Minister wrote, “What euphoria over the distribution of appointment letters to thousands of youth later in the day at Veterinary College playground, Khanapara! Look Forward to fulfilling our commitment to providing 1 lakh jobs.”

Assam CM added, “We commit, we deliver – Major milestone in our drive to ensure one lakh jobs in Assam. Following 27,737 successful recruitments, GoA will now hand over appointment letters to 11,202 candidates in 21 government departments on September 23, 2022, in a ceremonial function in Khanapara, Guwahati.”

The highest number of appointments are made to the Home and Political Department with a total of 5335 posts. Followed by 3,811 in School Education and 927 in Higher and Technical Education.

Public Works Department (PWD) has about 304 recruits, while 299 vacancies have been filled up in Health and Family Welfare, followed by 277 in Panchayat and Rural Department, and 137 in Irrigation Department.

Other Departments where recruitments have taken place in Handloom and Textiles, Cooperation, Information and Public Relations, and Skill, Employment and Entrepreneurship Departments as well.

Also Read: India Is Not A Constitutional But Civilisational Democracy: Himanta Biswa Sarma